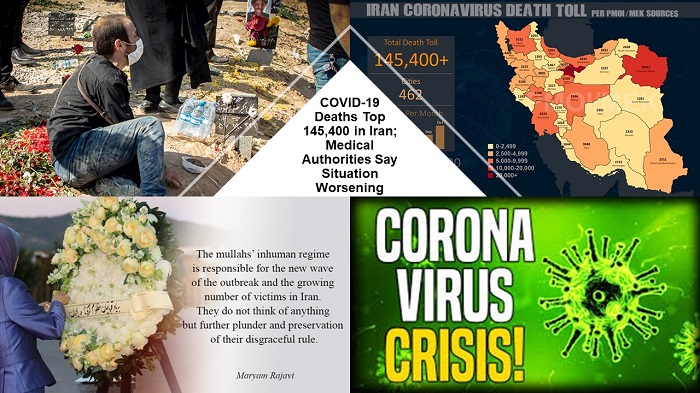 The Coronavirus health crisis in Iran is showing no signs of slowing down. More than 145,400 people have died after contracting the virus according to the National Council of Resistance of Iran (NCRI), and the People’s Mojahedin Organization of Iran (PMOI / MEK Iran), despite the regime only reporting a total of 37,409 deaths.

However, despite the false statistics that are being reported by the Iranian government, the country’s Ministry of Health has admitted that there have been recorded single-day death counts during the month of October, showing that the situation is worsening rather than improving.

#Iran: The People’s Mojahedin Organization of Iran (PMOI / #MEK) announced this afternoon, Friday, November 6, 2020, that #Coronavirus has taken the lives of more than 145,400 people in 462 cities across Iran. #COVIDー19 https://t.co/6xQpqmdODh

The Ministry of Health is warning about a “third wave” of infections, however many are questioning if the first wave actually ever ended.

The (PMOI / MEK Iran), took matters into its own hands at the beginning of the outbreak because it knew that the regime could not be trusted to be truthful to the people and to the international community.

Even though the World Health Organization (WHO) and foreign governments called on all countries to be open, honest, and transparent about the situation in their respective countries, the Iranian regime started and continues, with lies, denials, and deceptions.

The (PMOI / MEK Iran), has been monitoring the situation closely and has been in contact with hospitals and mortuaries, compiling recording and reporting accurately and truthfully on the situation. It has also been using eyewitness testimony and records from the National Emergency Organization and it has pointed out that the outbreak started in Iran long before the regime cared to admit.

More than 145,400 people have died of the novel #coronavirus in 462 cities checkered across all of Iran's 31 provinces, according to the Iranian opposition PMOI/MEK.

Yet, Iranian President Hassan Rouhani maintains that he has dealt with the situation responsibly and that news about the outbreak was relayed immediately.

This is not the case at all. The outbreak was already well on its way to spreading across the country during the sham parliamentary elections and while the regime was celebrating its anniversary.

When the turnout to the parliamentary elections was low, despite the regime’s attempts to tell the people it was their religious duty, the regime said that it was because of health concerns. Yet the people made it very clear that the turnout was low because they refused to participate in such a sham. Furthermore, the people were still reeling from the incident in January where the notorious Islamic Revolutionary Guard Corps (IRGC) shot down a commercial airliner, killing all on board.

Over 145,400 people have died of the novel #coronavirus in 462 cities checkered across all of #Iran’s 31 provinces, according to reports tallied by the Iranian opposition PMOI/MEK as of Friday afternoon local time, November 6.https://t.co/mh0bX4XMPz

The regime’s mishandling of the Coronavirus health crisis is just giving the people of Iran one more reason to call for regime change. They already made it clear that they would not accept the regime’s corrupt rule, with the end of last year being marked by a massive uprising that really shook the regime to its core.

Another uprising is terrifying the Iranian regime because it knows that it will be further weakened. It is trying to quell dissent by cracking down hard on protesters and political prisoners, but the reality is that the regime can do nothing to stop dissent. No matter what action it takes, the people have made it clear that the only solution they will accept is the collapse of the mullahs.

President-elect of the National Council of Resistance of Iran (NCRI), Maryam Rajavi: The astounding rise in the Coronavirus death toll and the upward trend of the crisis in many provinces in Iran are due to the clerical regime’s inhuman policies. The only thing the mullahs are concerned about is to preserve their disgraceful rule.