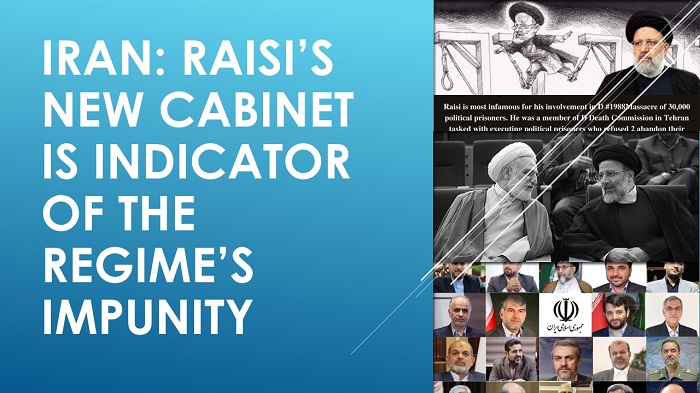 It’s still a wonder why Ebrahim Raisi‘s presidency in Iran hasn’t prompted countries in the West to pursue his prosecution. Raisi was a member of the ‘death commission,’ which carried out the theocracy’s orders to execute opponents of the state’s radical and misogynist interpretation of Islam in a systematic manner.

In the ‘1988 massacre‘ 30,000 women and men were killed across Iran, all of them were imprisoned at the time on political charges. It has been labeled as a crime against humanity and genocide by legal experts. According to Amnesty International, the majority of the victims were members of the prominent democratic opposition, the People’s Mojahedin of Iran (PMOI / MEK Iran).

By perpetrating more terrible crimes and killings against innocent citizens, the Iranian regime and Raisi are thriving on a sense of international impunity. According to Amnesty International, the regime is actively dismantling mass graves where the massacre’s victims are buried in order to wipe out all indications of criminality.

The regime’s crimes against humanity

Hundreds of Iranian community leaders joined victims of the regime’s crimes against humanity in Washington, D.C. on Thursday, following the G20 conference. The U.S. was encouraged to lead a bold policy against the genocidal regime in Tehran at this remarkable gathering organized by OIAC.

Former Vice President Mike Pence was one of the primary speakers. Raisi was characterized by him as “a brutal mass murderer responsible in 1988 for the massacre of 30,000 political prisoners. His selection as President is clearly intended to quash internal dissent and intimidate the people of Iran into remaining silent.”

Maryam Rajavi, the opposition leader and the President-elect of the National Council of Resistance of Iran (NCRI), voiced the same demand at Thursday’s summit. Raisi was established to stifle all forms of resistance, she added because the dictatorship is enveloped by a multitude of existential crises. However, as a series of statewide uprisings in Iran have clearly proved, changes are inevitable in Iran.

Mrs. Rajavi added: “The Iranian people are ready for the regime’s overthrow more than at any other time. It is time for the international community to side with the people of Iran and their desire for change.”

Mrs. Rajavi’s point was underlined by Vice President Pence: “There is an alternative, well organized, fully prepared, perfectly qualified and popularly supported alternative called the MEK. … The MEK is committed to democracy, human rights, and freedom for every citizen of Iran, and it’s led by an extraordinary woman. Mrs. Rajavi is an inspiration to the world.”

Hamid Noury, a regime agent, was arrested in Sweden when he was visiting the country. He is currently on trial for his role in the ‘1988 massacre’. Survivors and families of the victims are currently testifying against him. With this arrest, the international community’s initial measures are being made right now. It exemplifies the legal notion of ‘universal jurisdiction’ over the most terrible international crimes, and now that it has been proven viable, it must be used against the massacre’s higher-ranking offenders, including the regime’s current president, Ebrahim Raisi.