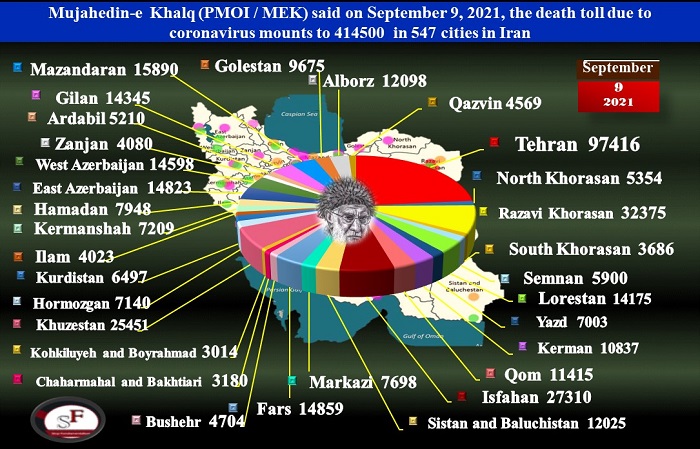 The Covid-19 crisis is wreaking havoc for Iran. The regime’s cruel coronavirus policy, along with the lack of widespread vaccination, has resulted in a significant increase in mortality and infection rates across Iran. According to the Iranian opposition group The National Council of Resistance of Iran (NCRI), and the People’s Mujahedin of Iran (PMOI / MEK Iran), 414,500 people had died in Iran.

40,000 pilgrims to travel to Iraq for Arbaeen

In recent days, regime officials granted permission for 40,000 pilgrims to travel to Iraq for Arbaeen. Arbaeen is a religious observance that takes place forty days after the Day of Ashura and the martyrdom of the third Shi’ite Imam, Hossain ibn Ali.

The Covid-19 outbreak would spread

These religious rites are used by the regime to spread terrorism and reinforce its grip on Iraq. Sending individuals to Iraq in the midst of the Covid-19 outbreak would spread the disease throughout Iran and Iraq.

“Officials should answer for the surge of Covid-19 patients, which would certainly result from this decision. Why those top officials ignore the health experts’ advice?” on Saturday, September 5, the state-run Johmhuri-e Eslami published an article.

Refusing to vaccinate the population

Parallel to refusing to vaccinate the population, the Iranian leadership began systemically robbing people. People suffering from the Covid-19 are still being pillaged by the so-called “drug and medicine mafia” linked to the Revolutionary Guards (IRGC) and the regime’s Supreme Leader Ali Khamenei.

Russia has outsourced the production of the vaccine

“The Russians have signed a contract with October to produce the Sputnik vaccine in Iran and deliver it to Russia, not Iran. In fact, Russia has outsourced the production of the vaccine, and the Sputnik vaccine produced in Iran does not reach domestic consumption and is exported,” Deputy of the regime’s bio-defense headquarters, Mohammed Kariminia, was quoted by Hamdeli.

The head of Tehran’s Covid-19 response committee, Alireza Zali, admitted that the regime’s authorities had refused to purchase doses of proven vaccines merely because they were unwilling to bear the associated expenditures. He explained, “We spent 720 million Euros on RamedSavir while we had to spend that money on vaccines.”

The drug and medicine mafia

“The delay in procuring vaccines is also related to the drug and medicine mafia,” Hamdeli stated, pointing to Zali’s statement.

The procurement of vaccines in Iran did not experience any delays. In January 2021, Khamenei barred the entry of legitimate vaccinations and insisted on manufacturing so-called “domestic” vaccines.

These vaccines were made under the supervision of the Execution of Imam Khomeini’s Order (EIKO), one of Khamenei’s many massive financial enterprises.

Meanwhile, one of the regime’s economists, Masoud Nilly, admitted on September 5 that continuing with the vaccine process “makes it impossible for us to get out of the pandemic situation.” As a result, the current circumstances are likely to persist.”

State-run media warns of people’s reactions as the regime maintains its inhumane Covid-19 policy and other malicious activities. On September 5, the state-run Jahan-e Sanat daily reported: “The system, with 43 years of experience, can no longer try and make mistakes, and if it wants to continue on the same path as before, it will lead to disaster.

[The regime] should not ignore the inner anger of the people about the current situation. Before it becomes too late.”