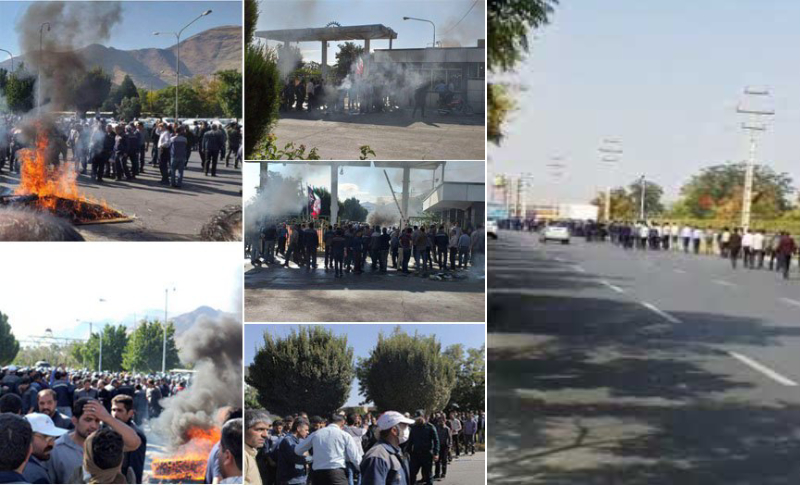 It has been reported that in the city of Arak in the western part of the country, workers from the Azarab factory gathered to protest their poor living conditions and their employment status that remains uncertain.

The workers gathered in a square in the city on Sunday 13th October and made it clear that regime officials have seven days to finalise the shareholding rights of the factory and to put an end to the uncertainty that is overshadowing their lives and their futures.

Before this, on Monday 7th October, workers at the Azarab factory had gathered in protest against their salaries that had still not been paid. As well as having to deal with extremely low wages and worsening economic conditions, the workers at the factory, like many Iranians across the country, are having to deal with unpaid wages. They also took the occasion to make it understood that they were not happy with the firm’s stockholder status remaining in limbo.

However, the peaceful gathering took a turn when anti-riot units were sent in by the regime. They attacked the protesters that were gathering peacefully and fired tear-gas at the workers.

The suppressive forces, fearful that the protests would spread from the factory towards the city, would not let the protesters move from their location, blocking them in via the car park. The approximately 1,000 security agents were tasked with surrounding the Azarab workers.

The President-elect of the National Council of Resistance of Iran (NCRI), Mrs. Maryam Rajavi praised the workers. In a message of support to them, she said that the “courageous workers’ willpower” will foil the regime’s brutal suppression, threats and intimidation. She lauded them for their bravery and encouraged other workers and Iranians to join them in solidarity.

Hail to the brave workers of Azarab, Arak, who did not succumb to the clerical regime’s threats &intimidations, continuing their protest today. The regime again responded by tear gas, arrests, &beatings. Such oppression will be foiled by the courageous workers’ will power. #Iran pic.twitter.com/yzKXAy9TP0

Protests have also been taking place at the haft Tapeh Sugar Cane factory because of the poor and deteriorating working conditions. On Sunday 13th October, workers rallied outside the premises protesting the dismissal of many of their colleagues. They also slammed the bogus charges that were brought against several of their innocent colleagues and they are protesting the lack of response to their concerns. The workers have announced that they are now officially striking.

Just a week prior to this, many of the factory workers had gathered outside the courthouse in solidarity with the workers that have recently been unjustly dismissed.

The domestic situation is deteriorating in Iran, with an increase in strikes, anti-government demonstrations and protests over the past few weeks. The Iranian regime has been struggling to regain control and it has been clamping down even harder on the public with many clashes turning violent.

There have been violent clashes and many arrests in the town of Lordegan with unofficial martial law being installed on Sunday 6th October. The protests started following a health crisis in which hundreds of Iranians, including children, were infected with the HIV virus because of dirty needles that were used by health officials.