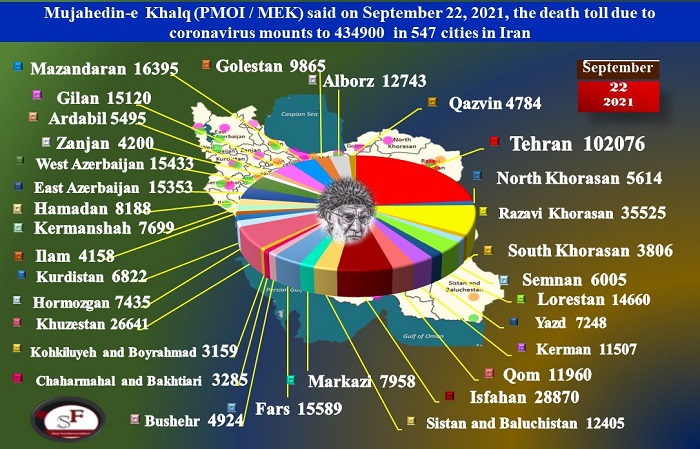 The fatality rate of Covid-19 in Iran is continuously growing. Death is endemic across the land. This tragedy might have been avoided. The National Council of Resistance of Iran (NCRI), and the People’s Mujahedin of Iran (PMOI / MEK Iran), reported that on September 22, 434,900 people had died in Iran as a result of the Covid-19 outbreak.

The Covid-19 epidemic has had catastrophic

The Covid-19 epidemic has had catastrophic psychological and economic repercussions on people’s lives, in addition to its high fatality rate.

“Twenty months have passed since the spread of coronavirus in Iran, and official statistics from the Welfare Organization show that coronavirus has orphaned 51,000 children, increased the number of female-headed households by 30,000, and pushed 612,000 families below the poverty line, resulting in a 25% increase in domestic violence,” wrote the state-run Jahan-e Sanat daily on September.

Many impoverished families have lost their breadwinners

In the meanwhile, many impoverished families have lost their breadwinners. “According to the Deputy Minister of Social Welfare, a child is orphaned every 12 seconds around the world due to coronavirus. It is believed that 51,000 children in Iran have lost their parents as a result of the Covid-19 pandemic, according to Jahan-e Sanat.

“The statistics recently announced by the Welfare Organization about those children who have become orphans due to the Covid-19 outbreak are incorrect because the Covid-19 [official] death toll is not accurate,” Mostafa Eghlima, a social specialist, told Jahan-e Sanat.

Approximately 30,000 women were heads of families

“As a result, the actual number of children orphaned by Covid-19 is much higher than reported. Approximately 30,000 women were heads of families when they applied for assistance, and the same 30,000 women have at least one or two children. However, according to Jahan-e Sanat, the welfare group merely releases data and does not pay attention to these people.

The suicide rate in Iran has been steadily increasing during the Islamists’ rule. “The average suicide rate in our country is about 7.02 percent per 100,000 people,” according to a member of the Scientific Society for Suicide Prevention in Iran, “but in some provinces, we have statistics of about 10 or 15 and even 20 percent per 100,000 people, which shows a worrying increase.”

According to reports by MEK supporters from Iran, the suicide rate has risen as a result of the Covid-19 outbreak and the associated poverty.

The suicide rate among Iranian nurses and medical workers is quickly increasing, and more disgruntled health professionals are expressing their intention to kill themselves.

The Covid-19 epidemic, along with the regime’s corruption and misguided economic policies, has wreaked havoc on people’s finances.

“In the 2010s, the minimum wage covered less than 35 percent of costs, according to official reports from the Statistics Center and the Ministry of Labor, and people had to make ends meet from other sources,” Etemad newspaper said on Monday.

The rising suicide rate, as well as the increased economic, psychological, and societal pressures on individuals and medical personnel, is not only attributable to the Covid-19 epidemic.

This catastrophe might have been avoided if the government, led by Supreme Leader Ali Khamenei, had utilized his financial clout to aid Iranians and medical experts, or at the very least permitted vaccinations to enter the country.

Mrs. Maryam Rajavi the President-elect of the National Council of Resistance of Iran’s (NCRI): Unfortunately, this is the second school year that begins amid the pandemic and in the face of the clerical regime’s catastrophic conduct and criminal policies in tackling the Covid-19. Suppose Khamenei and his bloodthirsty gang had spent a small part of what they squander on domestic repression, warmongering in the region, or nuclear and missile programs, on vaccinating the population. In that case, there is no doubt that the schools and universities would have been in healthy and safe conditions to resume work.