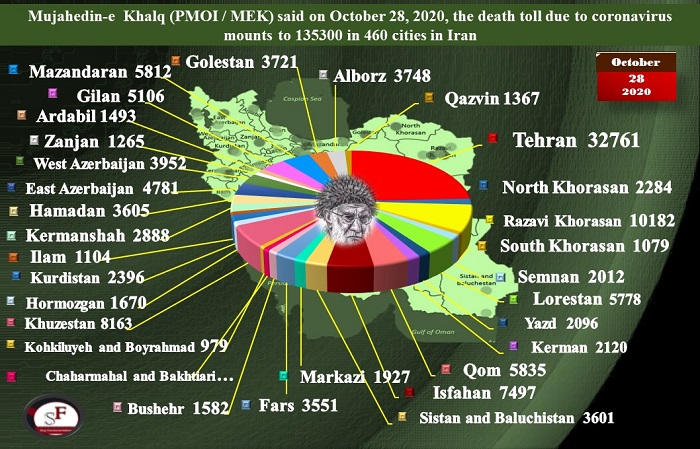 As of 28 October, over 135,300 people have died from coronavirus in Iran. Covid-19 has swept across the nation, spanning 460 cities across all of Iran’s 31 provinces, including 32,761 deaths in Tehran and 10,182 in Razavi Khorasan. This death toll has been reported by the Iranian opposition, the National Council of Resistance of Iran’s (NCRI), and the People’s Mojahedin Organization of Iran (PMOI / MEK Iran),  who are able to obtain the true figures from their insider sources. The Iranian regime continues to deny the real death toll and is currently declaring the official death toll to be 33,714, around a fourth of the actual number.

The People’s Mojahedin Organization of Iran (PMOI / #MEK) announced this afternoon, Wednesday, October 28, 2020, that the #Coronavirus has taken the lives of more than 135,300 in 460 cities across #Iran.#COVID19 https://t.co/zwGhL7XAgw pic.twitter.com/ymjotL5WTh

Despite being downplayed by the regime, the number of deaths reported by the regime’s Health Ministry spokesperson is still unprecedented. These are the highest numbers since coronavirus reached Iran eight months ago.

According to the regime’s official IRNA news agency, the Health Ministry spokesperson announced: “Currently the numbers of new cases and people hospitalized on a daily basis are rising in nearly all provinces. Unfortunately, we are witnessing an unprecedented escalation in coronavirus deaths across the country.”

Over 135,300 people have died of the novel #coronavirus in #Iran according to reports tallied by the Iranian opposition #MEK The official death toll declared by the regime stands at 33,714, around a fourth of the actual figure. pic.twitter.com/I1nQ0BEhKE

The news program Akharin Khabar has broadcast that Reza Malekzadeh, the research and technology deputy of the Health Minister stated: “Since the beginning of the Covid-19 outbreak until last month, 35 million people have contracted the virus at least once, and 50 million other people are threatened.”

Healthcare professionals in Iran have repeatedly expressed their concerns over the lack of resources and the overworking of healthcare staff. As reported by the ISNA, the head of the transplant department in Khomeini hospital affirmed: “Previously, in each section, there were 20-30 hospitalized patients, and two patients were on oxygen support. Now, we have 30 patients in the same sections, and they all need oxygen support. It is clear that the system will not be able to respond. Anywhere you see the number of Covid-19 deaths being higher than the international average, it is because the medical system has been overloaded. If we can’t prevent, it means that our care system has been over-capacitated.”

More than 134,500 people have died of the novel #coronavirus in 460 cities checkered across all of Iran's 31 provinces, according to the Iranian opposition PMOI/MEK.

Mehr News Agency reported that the dean of West Azerbaijan Medical Sciences University emphasized the dire conditions in West Azerbaijan due to coronavirus: “The province is in the worse Covid-19 conditions and all ICU beds and special hospital beds are filled. The number of hospitalized patients has reached 1,427, of which 304 are new and 269 are in ICU. Today, according to the latest statistics, with 23 new deaths, the total number of deaths in the province has reached 1,640.”

The deputy dean of Shiraz Medical Sciences University expressed the terrible situation in Fars province, according to ISNA news agency: “In the past 24 hours, there have been 21 Covid-19 deaths, and the total number of victims has reached 1,306. The number of hospitalized patients is 1,343, of whom 174 are in critical conditions.”