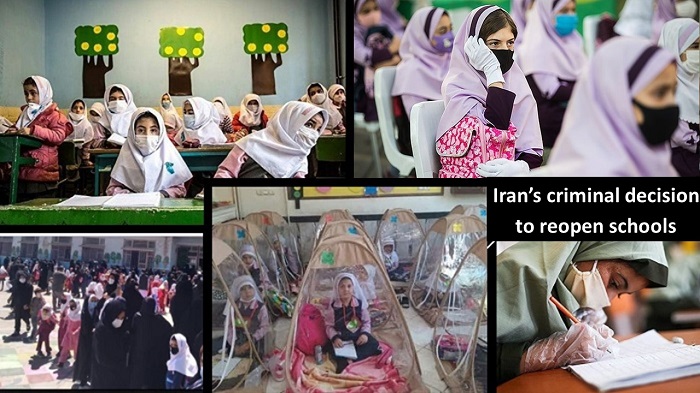 The Iranian regime made the disastrous decision to reopen schools early and without the necessary protective or hygienic equipment, during the coronavirus pandemic, unnecessarily endangering the lives of millions of children.

Plenty of regime officials and even the state-run media have described this as a “genocide” and a “humanitarian catastrophe”, noting that the third wave of the virus is on its way or already here.

Vatan-e Emrooz state-run daily: Less than 10% of students have arrived in schools, in fear of #coronavirus. People find it strange that the Health Ministry has remained silent about the reopening during #COVID19 @WHO @WHOEMRO
Details Here⬇️https://t.co/4AzEGVryWD pic.twitter.com/KgolxDIm7P

The state-run daily Resalat and Deputy Health Minister Iraj Harirchi spoke of rising coronavirus hospital admissions and death figures that rank Iran as “one of the five most seriously affected countries in the world”. While other officials described the situation as “critical” and said the healthcare system is “collapsing”. So why did they open the schools?

Iranian schools normally open on September 22, which would have been bad enough, but the regime decided, bizarrely, to open them 15 days earlier, despite warnings from doctors and experts, and refused to provide the needed equipment to do so safely in accordance with standard protocols.

On September 12, Ismaili, a member of the parliament’s Education and Research Commission, said: “If we want to hold in-person classes, schools must be disinfected every day, and students are required to use masks and gels; these require families to undertake large expenses. There is also a need for constant thermometry, for which we are not currently prepared.”

While Hossein Gheshlaghi, a member of the Supreme Medical Council, warned that the reopening of schools will increase the third wave and overwhelm the healthcare system, citing that strict quarantine measures in March and April would have lessened the impact of the disease.

Politicians, healthcare experts, and media outlets from across the country are citing instances of teachers, support staff, and even children catching coronavirus – some forced to go to work/school even though they are ill – and some dying.

This is not surprising considering that there have been over 112,000 Coronavirus-related deaths so far,  according to reports tallied by the Iranian opposition People’s Mojahedin Organization of Iran (PMOI / MEK Iran), which the regime is trying desperately to cover up because its ultimately their fault that people are getting sick and dying. The regime is failing to take even the most basic measures to support the people; more concerned with missile building and terrorism.

The Iranian Resistance, the National Council of Resistance of Iran’s (NCRI), wrote:  “The mullahs’ performance in countering the Coronavirus cannot be described as merely irresponsible. All the evidence points to a deliberate strategy to kill the Iranian people in order to preserve the regime. This is what the Iranian resistance calls the strategy of causing mass human casualties.”

Mrs. Maryam Rajavi the President-elect of the National Council of Resistance of Iran’s (NCRI): The regime’s criminal rulers in Iran on the one hand order the schools to open without having the minimum hygienic and preventive preparations, and on the other, sanction religious gatherings in the month of Muharram.

The rising number of #coronavirus cases before the outbreak of flu epidemic in Autumn, is a product of the criminal policies of Khamenei and Rouhani. #Iran