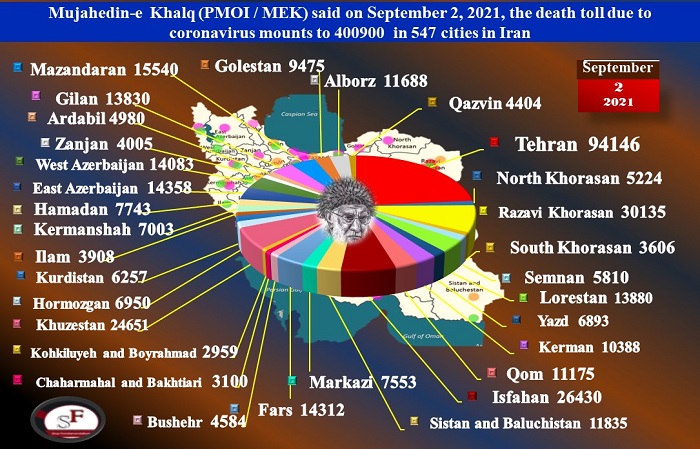 The volatile situation of Iran’s society and the regime’s inability in dealing with growing crises like the Covid-19 outbreak were reflected in Iran’s state media on Tuesday. They also brought attention to the regime’s impasse with the West.

The National Council of Resistance of Iran (NCRI), and the People’s Mujahedin of Iran (PMOI / MEK Iran), reported that the coronavirus death toll in 547 cities surpasses 400,900.

The state-run Mostaghel daily wrote, “the government’s inability to address issues such as inflation and other economic problems, as well as the Covid-19 outbreak, has left the middle class generally dissatisfied and complaining about the status quo.”

The state-run Jahan-e Sanat daily also expressed concern over authorities’ lack of understanding of people’s difficulties. Officials merely make hollow promises, according to Jahan-e Sanat, and “to date, many of these promises have not been implemented, and as a result, the country’s economic, social, and cultural problems have become more complex every year.”

The roots of the country’s economic problems

“Today, the scale of these problems has reached such a level that even if all US economic and banking sanctions on Iran are not lifted tomorrow, this action will have little effect on solving the roots of the country’s economic problems and rescuing people from the tsunami of poverty. A tsunami that has crushed people,” Jahan-e Sanat added.

The Covid-19 pandemic and its escalating mortality rate were the primary issues in Iran’s state media on Tuesday. According to the Iranian opposition, the death toll is rapidly approaching 400,000, with over 2,000 deaths every day. The regime’s purposeful inaction and the regime’s Supreme Leader, Ali Khamenei’s unlawful decision to ban credible vaccines are the key causes of this disaster.

The Covid-19 vaccine is unacceptably dangerous

“The Covid-19 vaccine is unacceptably dangerous. Meanwhile, the death toll and infection rate continue to rise on a daily basis.

The only option is for everyone to be vaccinated. Because we cannot control the situation with social distancing and health regulations if there is no immunization, it will be more difficult to contain the virus. “People are irritated,” the state-run Setare Sobh daily reported.

While the public’s hate for Khamenei grows as a result of his unlawful decree banning vaccines, some media sources attempt to whitewash him.” Many experts have spoken out against these vaccines, and we may be able to import them from countries other than the US and the UK.

We do not like to get vaccines from any country

The country’s leader then raises a political problem, stating that “we do not like to get vaccines from any country,” which is correct and our policy. However, we misinterpreted the Supreme Leader’s words, which have already been clarified. According to our policies, we have the authorization to import vaccines from any legitimate source,” the state-run Farhikhtegan daily wrote.

As the Covid-19 situation worsens, public resentment of the authorities grows, and the regime’s dread of popular uprisings was reflected in the state media on Tuesday.

“By making unfounded recommendations, we caused more inconvenience to the people under pressure. However, the lack of resources to control this disease has led to a serious gap between the people and the [regime], and this gap is worrying,” Sharq daily reported.