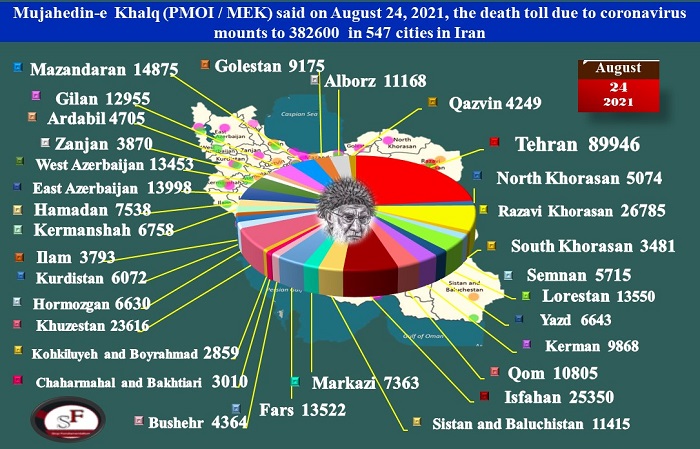 The National Council of Resistance of Iran (NCRI), and the People’s Mujahedin of Iran (PMOI / MEK Iran), reported that the coronavirus death toll in 547 cities surpasses 382,600.

Warning regarding the rise of Covid-19 infections

The Iranian Ministry of Health’s Statistics and Information Center has issued a warning regarding the rise of Covid-19 infections and the increased death rate among people who have been vaccinated. This warning denotes the regime’s immunization program’s full failure.

Those who have been vaccinated, particularly those over the age of 60, have a death rate that is tens of times greater than the global average.

After reviewing the situation with the Scientific Committee of the Tehran Covid-19 Task Force, the Ministry of Health’s Information Center stated: “The irregular gap between the first and second doses and neglection regarding the type of vaccine used for people are among the main factors leading to more deaths.”

Under 100,000 received the first dose of the vaccine

“So far, more than 91,000 people who received the first dose of the vaccine have been infected with Covid-19 after two weeks and have been admitted to hospitals. The average age of these individuals is between 60 and 90 years old,” the center added.

Approximately 8,500 people have died in hospitals, the majority of whom were in their 70s and 80s. According to the article, about 23,000 people who had received two doses of the vaccine and were fully immunized caught the virus again.

Iran’s daily death toll has reached new heights in recent days, with around 700 people killed in a single day.

The number of persons who died of covid in Iran has been revealed at a time when several countries across the world have been able to lower the number of deaths through widespread immunization.

In a report and analysis to the Ministry of Health, Ali Sharifi Zarchi, the head of the Statistics and Information Technology Management Center, provided the number of covid hospitalizations and deaths in Iran after immunizations, saying that some markers are much higher than the statistics announced by some countries.

The fifth wave of the delta variant occurred

According to the study, there were 2,749,356 people in the population who had been vaccinated for at least two weeks.

People who have been vaccinated for more than two weeks had a death rate of 753 per million. In certain countries, the declared index is less than 10 per million.

“The fifth wave of the delta variant occurred at a time when it has been a few weeks since some vaccine brands have been in use, while other brands are still being injected.” according to the report.

The number of deaths per day will continue to rise

“Each day 220,000 people are contracting Covid-19. The number of deaths per day will continue to rise for another three weeks. How ceremonies are held can be effective in controlling the illness,” Deputy Health Minister Iraj Harirchi told Mehr news agency, an outlet linked to the regime’s Ministry of Intelligence & Security (MOIS).

This estimate was based on among those who did not take the covid test. These days, an average of 40,000 new cases of coronavirus are reported according to government figures. Harirchi underlined the stable and somewhat decreasing trend of infection and hospitalization in 14 provinces. In the next three weeks, he added, the death toll will increase.

In a provincial meeting of the Covid-19 Task Force, however, Regime Ministry of Health Saeed Namaki said that Coronavirus will in the future experience several mutations and Immunizations will be ineffective.