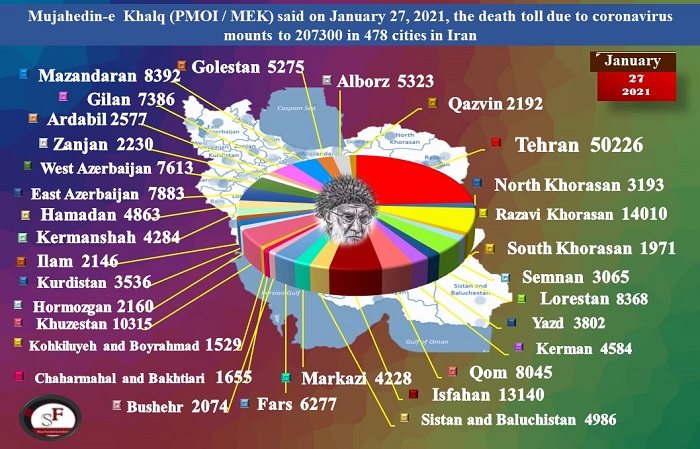 According to the reports by The  People’s Mojahedin Organization of Iran (PMOI / MEK Iran), and the National Council of Resistance of Iran (NCRI), Iran is not one of those countries.

In fact, Supreme Leader Ali Khamenei said on January 8 that the import of American and English vaccines was banned, dashing the people’s hopes for a safe and effective vaccine any time soon. (Even rejecting the 150,000 donated doses of the Pfizer vaccine.)

This as the regime has registered the highest number of deaths in the Middle East – 57,150 on January 22 – and experts believe this is just the tip of the iceberg. The coronavirus has taken the lives of over 207,300 people throughout Iran, according to the Iranian opposition The  People’s Mojahedin Organization of Iran (PMOI / MEK Iran), and the National Council of Resistance of Iran (NCRI).

The mullahs claim that they will soon have domestic vaccines, but many media outlets and medical experts inside the country have panned this.

On January 10, three senior members of the Iranian Medical Council, including its president, Dr. Mohammadreza Zafarghandi, and Iranian Medical Society head Dr. Iradj Fazel wrote to President Hassan Rouhani urging a non-politized vaccine rollout for the good of the country, saying that the domestic vaccine would not be ready soon enough.

Five days later, over 500 Iranian activists and personalities, most based in foreign countries, published an open letter to condemn the vaccine ban.

They wrote: “Khamenei’s ban on vaccines made in the U.S. and UK has endangered the lives of thousands of Iranians while he, his associates and senior officials of the Islamic Republic receive treatment with the most sophisticated western equipment and pharmaceuticals and fly abroad to countries such as the UK whenever they require further medical attention.”

While on January 20, 10 international human rights groups urged the regime to drop the ban, saying that this is the best way to “save lives, prevent illness, and slow the spread of the virus”.

They wrote: “Delaying the vaccination process will only prolong the deadly health crisis. We urge the government of Iran to immediately announce it will allow the purchase and importation of any safe and effective vaccine for COVID-19, in the interest of the health and wellbeing of the people of Iran.”

Several groups inside Iran also opposed the ban, including the Tehran Bus Company Workers Union, National Union of Retirees, Free Workers Union of Iran, and teachers’ unions citing concerns about safety, production speed, and efficacy. Their concerns are valid and the international community should increase pressure on the regime to lift the ban.