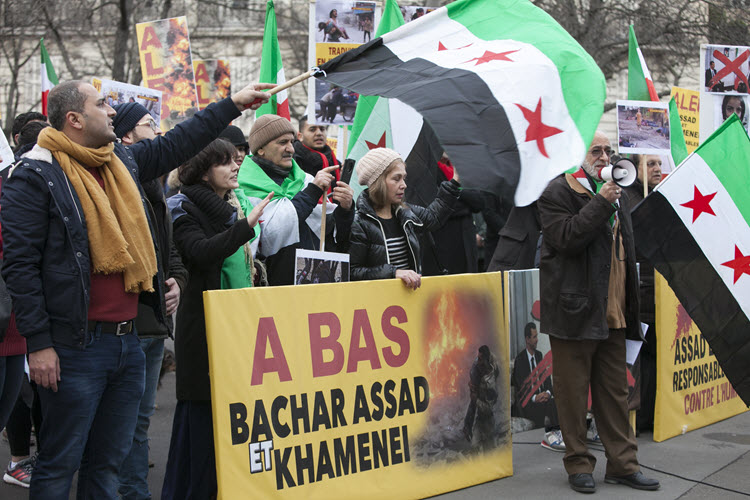 A rally was held in front of the Iranian regime’s embassy in Paris at the invitation of ‘Syrian Revolution coordination’ on Saturday, December 24.

Hundreds of Syrian people, as well as members of the Iranian Resistance and their supporters, gathered together to protest the crimes against humanity endured by the people of Aleppo. They condemned Bashar Assad and the Iran regime’s forces and mercenaries, as well as the attempts of the Iranian Guard to block the evacuation of East Aleppo.

Waving flags of the Syrian revolution and flags of the Iranian Resistance, the demonstrators shouted slogans against Khamenei and Bashar al-Assad, and called for them to be held accountable before international courts.

Protesters chanted, “ Down with Bashar Assad” and “Down with Khamenei”, as well as, “Long live the Syrian revolution, long live the Free Syrian Army”, and, “Khamenei and Assad are the butchers of Syrian people are war criminals and must be submitted to justice”.

The protesters also carried banners saying, “Maryam Rajavi: Aleppo is the icon of suffering and steadfastness in the world, Aleppo will not kneel and will rise again, free, tall and full of pride” and “Maryam Rajavi: Aleppo is the icon of steadfastness and eternal flame of resistance and a source of inspiration for all freedom loving people”, as well as, “Assad and Khamenei have committed the greatest crimes against humanity in the 21st century in Aleppo and must stand trial”, and, “Aleppo is the heart of the eternal resistance and will rise from the ruins and will be the herald of the demise of the mullahs all over the region.”

Participants chanted, “Khamenei is a Murderer”, “Bashar is a murderer”, “We must end the silence over the massacres in Syria” and “Syria will not kneel”.  Syrian, Iranian, and French figures spoke at the rally.

General Coordinator of the Syrian community in Paris, Mr. Ahmed Drickznla, stressed the unity between the Syrian and Iranian people, and their resistance in the face of two dictatorships ruling in the two countries.

Although it was unexpected, given that the rally was held on Christmas Eve, His Excellency Bishop Jacques Gaillot, surprised the demonstrators by joining them and speaking in support of the heroic resistance against dictators by Syrian and Iranian people, and praying for them.

On behalf of the Iranian resistance, Ms. Zolal Habibi, member of PMOI Central Council made a speech. The National Council of Resistance of Iran (NCRI) published the text of her speech which follows, here:

We are gathered here today to voice our solidarity with the brave steadfast people of Syria in their struggle for freedom.

And from here we salute the brave people of Aleppo; Aleppo which President-elect of the NCRI, Maryam Rajavi rightly called the eternal symbol of resistance and an inspiration to the people of the region and all freedom seeking people striving to liberate themselves from the oppression of the religious dictatorship ruling Iran and its mercenaries.

Today we witness the destruction of Syria on day to day basis via social media, it was evident in recent weeks that Aleppo was occupied by the IRGC and its mercenaries, with over 25000 militias on the ground; while the international community idly sat by and turned a blind eye on the situation on the ground in Syria; this inaction against the greatest carnage and crime against humanity in the 21st century is an inerasable stain, a shame and a mockery of the international community.

Tonight, millions around the world honor and celebrate the birth of Christ, this Christmas eve we wish that the oppressed people of Syria and Iran will also see the face of peace, joy, and prosperity.

And we call on people around the world to join in solidarity with the brave people of Syria for freedom and democracy and keep them in their prayers tonight.

Syria and Aleppo are in our hearts and the message of the martyrs and victims will resonate through time; as we vow to continue this struggle till the dawn of freedom.”