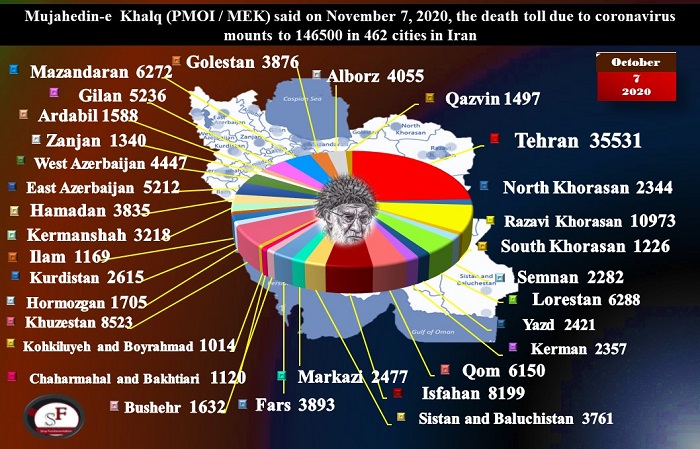 Covid-19 cases have been growing exponentially, according to an announcement from the Covid-19 Task Force. Over 146,500 people have died of the coronavirus in Iran, according to reports by the Iranian opposition, the National Council of Resistance of Iran’s (NCRI), and the People’s Mojahedin Organization of Iran (PMOI / MEK Iran).

The regime’s Supreme Leader, Ali Khamenei, has chosen to stay at a distance in relation to COVID-19. However, he said that sooner and not later a way to treat the disease will be found.

More than 146,500 people have died of the novel #coronavirus in 462 cities checkered across all of #Iran's 31 provinces, according to the Iranian opposition PMOI/MEK. pic.twitter.com/IKQMaA58Jk

In the meantime, it seems that it was quite likely that the death toll would have dropped significantly if the regime had listened to the warnings and taken action to minimize the spread of the virus. Khamenei did absolutely nothing and as the supreme leader offered no useful guidance to anyone in the country.

Recently, after analyzing Iran’s response to the pandemic, a research center revealed that if one of two methods had been implemented then many lives would have been saved. One of these is a complete lockdown while the other was ensuring widespread testing so the movement of the virus could have been slowed down, allowing health authorities the chance to treat those infected by the virus.  In Iran, neither of these suggestions was adopted, so the death toll has been high but the spread of the virus hasn’t stopped. Over the last 2 weeks, the death toll was 12% of the total number of COVID-19 reported cases. The world’s average is about 6.5%. This suggests that our death toll is actually much higher compared to the worldwide criteria.

#Iran regime inaction, cover-up, and propaganda have worsened the #COVID -19 crisis and have amplified the high mortality rate.https://t.co/UqPBLICk11

The death toll from COVID-19 puts Iran in 10th place compared to other countries around the world.  Iran also has a ranking standing on 18th for the number of tests carried out.

Mohammad Esmail Akbari, head of the Association of Medical Education said on October 26th on state-run TV said that those found infected with the virus should be isolated from others. If we neglect the people, the virus will go on spreading, leading to further negative reports about Iran’s failure to beat the pandemic crisis.

It is now so clear why the regime did nothing to help its citizens and that is because allowing the virus to spread would distract the public from blaming anyone.

On October 28th State health officials and the National Covid-19 Task Force urged people over and over again to wear masks and follow health guidelines. However, after 10 months into the pandemic, the regime hasn’t provided sufficient hand sanitizers. What has been provided is not free but only affordable by the middle classes. If the regime had acted faster and listened to what was happening around the world, the curve for COVId-19 in Iran would have been flattened, allowing its citizens to go about their daily lives safely.

More than 146,500 people have died of the novel #coronavirus in 462 cities checkered across all of Iran's 31 provinces, according to the Iranian opposition PMOI/MEK.

Experts are blaming government policy and decisions that have led to the terrible death toll. Khamenei is the main reason for the Iranian people’s misery and the rising death toll occurring throughout the country. It is quite clear that Khamenei is now so afraid while Iran’s people are fed up with the theocracy’s oppression and wish to oust the religious fascism that is currently ruling Iran. The slogans yelled by Iranians in the 2017 and 2019 uprisings tell their story:

May 13 – Tehran, #Iran
Tehran University students chanting the end of the mullahs' regime: