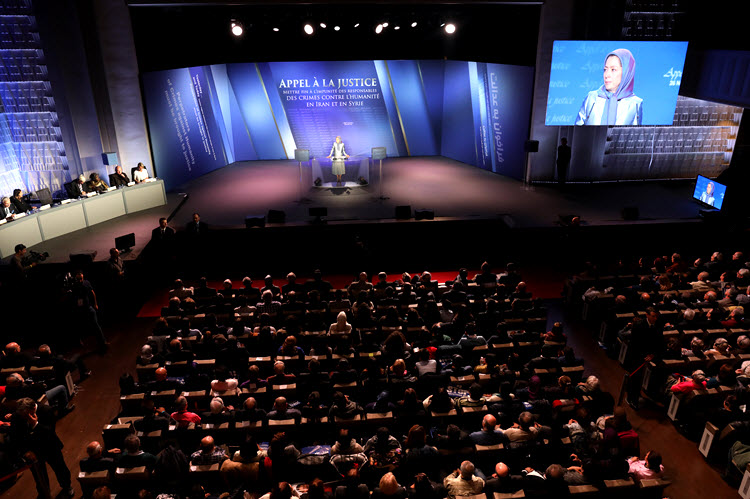 On Saturday 26th November an event was held in Paris calling for the end of impunity to the Iranian regime who are responsible for horrendous crimes against humanity. The National Council of Resistance of Iran (NCRI) have posted a timeline of the major event on their website.

The President-elect of the NCRI, Mrs. Maryam Rajavi, was praised and commended for her tireless and determined efforts on behalf of the Iranian people. Mrs. Rajavi took to the stage and thanked all those who played a part in achieving freedom for the political prisoners who have now finally been relocated out of Camp Liberty in Iraq.

She said: “In this crucial endeavour, our Resistance overcame the ill will and intentions of the Iranian regime. The regime’s numerous political and intelligence schemes failed and they did not accomplish anything by consecutive terrorist and rocket attacks. So, the Resistance’s ultimate success is one of the most important signs that the clerical regime is in the phase of weakness and demise. Now the mullahs who plotted extensively to destroy all the members of the PMOI at Camp Liberty, have suffered a serious setback and there is not a day when they do not lament about the danger of the PMOI’s resurgence within Iran.”

Mrs. Rajavi pointed out that the Iranian regime is clearly fearful of the opposition. She said that it is stepping up on oppression because it is afraid of the people who are becoming more and more open about their disapproval of the government. Every week there are protests and strikes in cities across Iran, and prisoners are also going on hunger strikes.

Speaking about the aftermath of the Iran nuclear deal which saw huge amounts of financial assets being released, Mrs. Rajavi said: “One year after the lifting of sanctions, poverty and hunger continue to haunt our people more than ever. In the meantime, the regime’s internal factions have begun settling their accounts by revealing a plethora of inner and outer secrets, financial frauds, and moral scandals. Today, the mullahs are no longer able to contain their own internal factions or the social protests, as they previously did.”

She called on the people and the international community to push their governments for actions that will deal with the Iranian regime and punish it for the human rights violations that are taking place. She asked for the silence and inaction to end now.

Betancourt highlighted the case of political prisoner Maryam Akbari-Monfared who is currently standing against the mullahs’ regime from her cell by calling for justice for her siblings who were killed in the 1988 massacre that saw around 30,000 people executed.

Robertson also spoke about the 1988 massacre and pointed out that it is a horrific crime that must be punished. He said that those who lost their lives during that summer were killed in the most horrific manner, and “without trial, without appeal and utterly without mercy”.

Many of the speakers emphasised the importance of evicting Iran from Syria. Alsulami said: “We must strive to evict the Iranian regime from Syria and the region. We must support our brothers and sisters in the PMOI who are the main resistance to the Iranian regime and who will inevitably defeat the regime”.