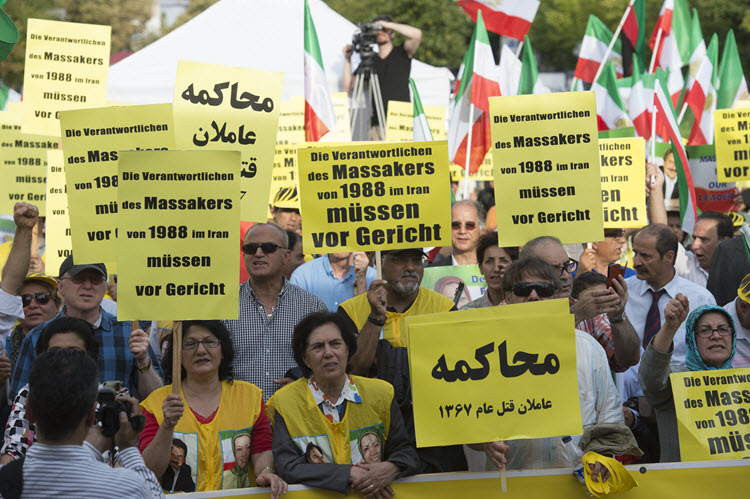 Leader of the Iranian Resistance, Maryam Rajavi, gave an impassioned speech at the Iranian’s Demonstration in Germany.

She spoke of the need to prosecute leading mullahs for their role in the crimes against humanity committed by the regime, like the 1988 massacre.

She said: “Twenty-eight years ago, when the mullahs resorted to this massacre, western governments chose to remain silent. So, the mullahs’ killing machine surpassed Iran’s borders and targeted political opponents abroad, and now it has engulfed the Middle East and particularly, Syria, in blood.”

This terrifying spread of unrest and destabilisation, was just one of the reason that Rajavi advocated Western governments joining the call for justice and bringing the Regime to trial.

She said: “As a matter of fact, there is a direct relationship between the catastrophic executions in Iran and the mullahs’ export of war and terrorism to the Middle East and other countries. As long as this murder machine is not stopped in Iran, as long as the [resistance] members in Ashraf and Camp Liberty are massacred and struck by rockets, and as long as prisoners are mass executed such as the 25 Sunni political prisoners who were hanged last month, the Iranian regime’s export of instability, insecurity, and warmongering will also carry on.”

Rajavi also spoke of the bravery and determination shown by members of the National Council of Resistance of Iran (NCRI) and the People’s Mojahedin of Iran (PMOI).

She said: “Khomeini and Khamenei wanted to annihilate the generation of the People’s Mojahedin, but as Massoud Rajavi (her husband and former leader of the Resistance) once said, ‘Our homeland, history, culture and society have always nurtured the Mojahedin and provided us the possibility to raise pioneers and path breakers from among Iran’s children’.”

Rajavi emphasized the disillusionment of the Iranian people towards the totalitarian regime demonstrated by the wave of protests across the country in recent months.

She said: “Today, the people of Iran have targeted the ruling regime with a tide of protest and detestation in a relentless movement of seeking justice. In contrast, Iran’s ruling mullahs have set aside all concealment of the massacre, officially defending it. But they are not able to defend such a horrendous bloodshed legally or politically, or justify it religiously. So, they can only resort to this shameless justification that if they did not kill the Mojahedin, they would have lost their rule and their power.”

She added: “The mullahs do not even dare to publicize Khomeini’s fatwa for this horrendous crime in their media, because the decree is nothing but an order to commit a crime against humanity which contravenes even their own fundamentalist jurisprudence.”