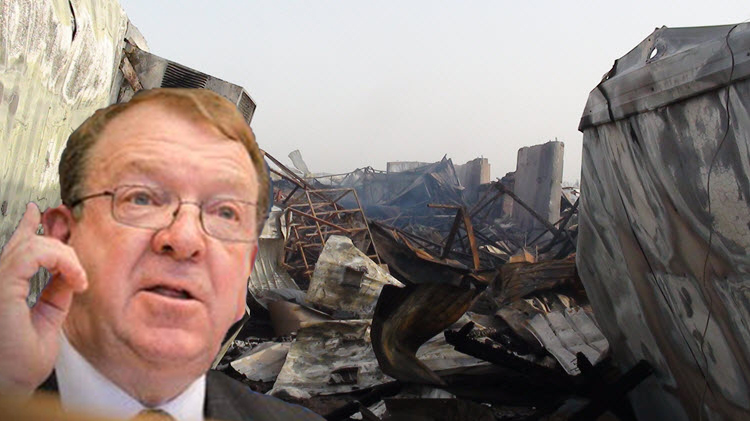 In a strongly worded press release on Tuesday, Members of the European Iraqi Freedom Association (EIFA) of the European Parliament said that, yet again, their warnings to the US and the UN about the danger of attacks on Camp Liberty had gone unheeded.

Monday night’s missile bombardment,  which seriously wounded 50 residents, including 14 women, and destroyed large parts of the camp, was an “outrageous and unprovoked attack on the defenceless Iranian refugees,” the MEPs said, and “could not have happened without the active collusion of at least some parts of the Iraqi government and their Iranian patrons.”

MEP Struan Stevenson, EIFA’s President, said: “I am forced to ask, what on earth are the United Nations and United States doing? While they had repeatedly given assurances regarding the safety and security of the residents in writing, they kept their silence and did nothing while Iranian agents, with the full connivance of the Iraqi government, undertook repeated surveillance missions to the camp, under the pretext of being family members of the refugees, while in fact they hurled abuse at the residents and took detailed photographs of the camp’s layout.”

“We repeatedly warned that this was a clear precursor to another missile attack,” he said.

In addition, Mr Stevenson, an experienced British politician, said that the blockade of essential supplies to Camp Liberty was also a recognisable forerunner to “another attempted massacre.”

As such, he continued, the “ineffectiveness and incompetence” of the US and the UN “has been quite breathtaking”.

The MEPs made demanded: “the immediate intervention of the UN and the US embassy in Baghdad, firstly to hold the perpetrators of this crime accountable and bring them in to justice and secondly to guarantee the safety and security of the camp until the last person can be airlifted to safety.”

In addition, the statement concluded, the Iraqi government must end the blockade and prevent Iranian Intelligence (MOIS) agents “from mounting further reconnaissance” at Camp Liberty.