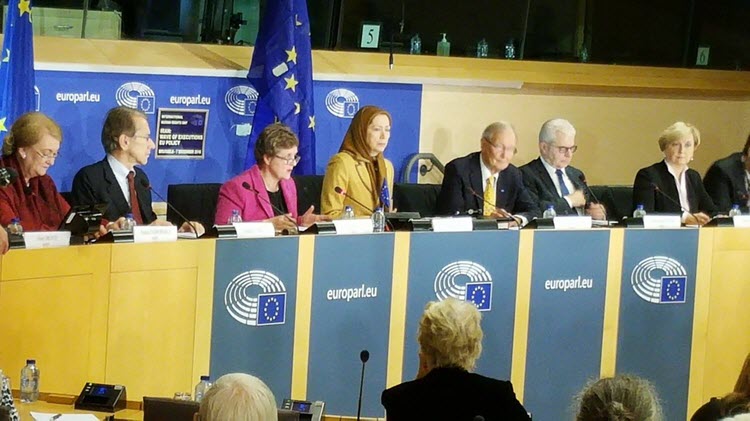 European lawmakers held a conference at the European Parliament on Wednesday, December 7, the eve of the Human Rights Day. The focus of the meeting was the violations of Human Rights in Iran. It was held by the initiative of the Friends of a Free Iran intergroup at the European Parliament, which has support of some 300 MEPs from different political groups, and proposed to urge the EU High Representative, Federica Mogherini, and Member States to condition the expansion of relationships with Iran on a halt to the executions.

The Iranian opposition leader, Maryam Rajavi, who heads the National Council of Resistance of Iran (NCRI) was the keynote speaker.  She was joined by the former Italian Foreign Minister Giulio Terzi as well as a young female former political prisoner, Shabnam Madadzadeh, 29, who spent 5 years in prison and has recently managed to leave Iran.

A number of MEPs from various European countries also spoke at the event.

Ms. Anthea McIntyre, MEP from UK chaired the meeting because Gerard Deprez lost a family member and he had to attend a funeral.

She said, “We have gathered on the occasion of the International Human Rights Day, which is this coming Saturday, and we are absolutely delighted to have Mrs Maryam Rajavi with us, who as you all know is President of the National Council of Resistance of Iran. I think you all know Madam Rajavi is regarded as the number one enemy of the mullahs. Because she leads an anti-fundamentalist movement which believes in a tolerant and democratic Islam, a secular government for a free future for Iran and the abolition of the death penalty which is very important for us here in Europe.”

Ms. McIntyre was also delighted to have the former Italian minister of foreign affairs, Giulio Terzi,ther, calling him, “one of the leading international thinkers in Europe.”

She said that we’re told that there are moderates and there are hardliners in Iran, and we should support the moderates, so that the Human Rights situation will improve in Iran. The nuclear accord with Iran was supposed to be the beginning of a new era, and that assumption has been at the heart of EU policy on Iran.   “However, my friends, we should take a very close look at the record of the last 3 years under Rouhani: More people have been hanged under the so called “moderate” Rouhani than during the time of Ahmadinejad. Rouhani has not said a word against these executions. Indeed, he defends the death sentences as the rule of God. Religious and ethnic minorities are suppressed more than ever before. And Iran has increased its participation in the massacre of Syrian people,” Ms. McIntyre said.

EU policy makers have ignored reality, and are advocating for more business deals with this regime. “Let us not forget that most of Iran’s economy is run by the Islamic Revolutionary Guards NOT by ordinary Iranian businessmen,” she stated, adding, “So the EU policy has encouraged the mullahs to continue their internal repression and to carry on crimes in Syria in support of Bashar Assad.”

Ignoring the mass executions in Iran and in particular the massacre of 30,000 political prisoners, mainly from the PMOI in 1988, is just one example of the failure of the international community. Those responsible for the massacre are still holding key positions. Pour Mohammadi, the current minister of Justice in Rouhani’s cabinet was a member of the “Death Commission” which was responsible for thousands of execution, and he says that he is proud of his role in executing thousands of PMOI members in prison.

“This frankly shames the free world. It is totally unacceptable for the EU to remain silent and continue business as usual with such a regime. Our High Representative Mrs. Mogherini must condemn the 1988 massacre as a crime against humanity. The EU should put firm conditions on its future relations with Iran. We must demand a stop to the executions of children. We must demand justice for women.  We must demand respect for human rights. The people of Iran expect us from Europe to stand up for them, and not to ignore their suffering. We should side with the people of Iran and not with the brutal dictators in Iran. And that I think is the clear message that should go out from us here today. So it gives me enormous pleasure now to ask Madam Rajavi to address us. She is a woman of enormous dignity, of resilience, of strength for whom we have enormous respect. So Maryam, we look forward to hearing from you,” concluded Ms. McIntyre.