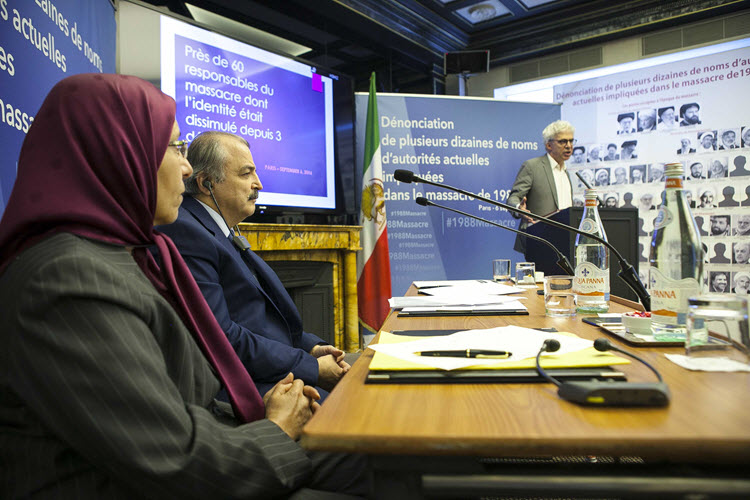 In a September 6 article by Harriet Sinclair in the International Business Times, she writes about the release of the names of senior members of the country’s current regime, allegedly involved in the 1988 massacre of 30,000 political prisoners by the Iranian resistance.

The People’s Mojahedin Organization of Iran (PMOI/MEK) conducted an investigation into those it believed involved in the massacre, and documented what they uncovered: The names of 59 people who hold offices in Iranian political institutions.  Their investigation follows a wave of protests and demands for members of the Iranian regime to face justice for their roles in the killings.

A fatwa was issued by the country’s late Supreme Leader, Ayatollah Khomeini. All across the country, and particularly in Tehran, Death Commissions were formed.  In the end, 30,000 political prisoners, many of whom whom were teenagers, were executed and buried in mass graves.

On Saturday, September 6, The National Council of Resistance of Iran (NCRI) revealed the names of those it’s investigation found to be involved in the massacre.

The chairman of the foreign affairs committee of the NCRI, Mohammad Mohaddessin, has called for a commission of inquiry to be set up by the United Nations.  He stated that the UN must “take the necessary steps to bring the perpetrators of this great crime to justice,” and added, “The impunity must end. Inaction in the face of this crime has not only led to further executions in Iran, but has also encouraged the regime to spread its crimes to Syria, Iraq and other countries of the region.  Some 2,700 executions have been officially carried out in Iran since (President) Rouhani took office. Just several weeks ago some 25 Sunnis from Iranian Kurdistan were hanged en masse in a single day, and several days later another three political prisoners from Ahvaz were executed.”

Maryam Rajavi, President-elect of the NCRI, joined him. She reiterated her call that after nearly 30 years, those involved in the massacre must finally be held accountable.  Speaking at a seminar for Iranian communities, she said, “Standing up to the violations of human rights in Iran is also the responsibility of Western governments because the consequences of this regime are not confined to Iran,” Iran Wire reported.

“The terrorism and fundamentalism emanating from Tehran have victimised defenceless people in Nice, Paris, Brussels, etc. Make your relations with the Iranian regime contingent on an end to executions in Iran. Put (Supreme leader) Khamenei and his accomplices on trial in an international court for crimes against humanity, specifically in 1988. And respect the Iranian people’s resistance for regime change.”