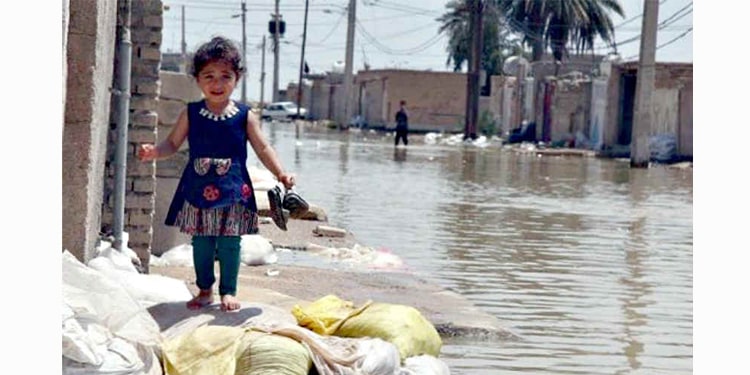 On the past October 13, the International Day for Natural Disaster Reduction provided a chance for countries to focus on their efforts and demonstrate expertise by demonstrating how far they have come in disaster management and casualty reduction.

Natural disasters under the mullahs’ tyranny

While many countries have made progress in reducing or at least controlling natural catastrophes, the Iranian people have become mass victims of natural disasters under the mullahs’ tyranny.

A 5.7 magnitude earthquake struck Iran’s Andika County on October 9. At least 11 villages have been devastated, according to Iranian state media, and a dozen people have been injured. Despite this, Iran’s state media said on Tuesday that the regime has failed to assist villagers in Andika, in the province of Khuzestan in southwest Iran.

The earthquake-stricken areas of eastern Khuzestan

“Helping the earthquake-stricken areas of eastern Khuzestan is slowly progressing. Out of 600 villages in Andika, 330 villages have suffered heavy damages, and 30 villages have been destroyed by 80 to 90 percent,” the state-run Vatan-e Emrooz said on Tuesday.

“Many homes have been destroyed, and the process of providing relief to the residents of this area is difficult because roads are blocked. The earthquake victims’ living conditions in this province are deplorable due to the loss of stone and wood houses,” the daily reported.

Iran is situated on two major tectonic plates, making it susceptible to earthquakes. Despite this, several large faults are occurring across the country.

Earthquake as powerful as the one in Kermanshah

“If an earthquake as powerful as the one in Kermanshah province happens in Tehran, 200,000 buildings will be totally destroyed and collapse.” In 2017, Ali Beiollahi, the former director of the regime’s Ministry of Roads, Housing, and Urban Development’s Earthquake Research Department, claimed, “The collapse of this many buildings will undoubtedly result in one million casualties, a real disaster indeed.”

Kermanshah, in northwest Iran, was rocked by a massive 7.3 magnitude earthquake in 2017. Over 600 people were killed, 70,000 were homeless, and many were forced to live in tents for more than a year and a half. Hassan Rouhani, the regime’s previous president, then falsely claimed that “almost everybody” had returned to homes that had been renovated or repaired.

Many people still lack basic shelter, according to IRNA News Agency on November 27, 2018, despite the city streets being flooded with rain and mud that has “penetrated the tents of earthquake victims,” and residents attempting to mitigate the situation by “using plastic sheets and digging water channels.”

Another 5.9 magnitude earthquake struck the province of East Azerbaijan in northwest Iran. At least 520 people were hurt, with five people killed. Again, the regime delayed assisting the villagers, and many individuals are still recovering from the earthquake two years later.

Support the victims at the time

The NCRI President-elect, Mrs. Maryam Rajavi, urged people to support the victims at the time. “Mullahs’ regime is covering up damages in the 5.7 magnitude earthquake in West Azerbaijan. Over 100 villages were damaged. I request help for those affected, especially in Khoy and Salmas, and urge vigilance by fellow compatriots in the province about subsequent aftershocks,” she said.

The majority of earthquake fatalities and substantial property loss are caused by buildings collapsing. Using contemporary construction regulations and innovative technical procedures, the regime may limit the number of victims.

The dictatorship has wasted the country’s resources

Instead, the dictatorship has wasted the country’s resources on terrorism and other nefarious acts. “Iran has been among Bashar al-most Assad’s reliable partners, extending almost $5 billion in lines of credit to the Syrian regime and pouring resources and military personnel into the region,” according to a US State Department report.

On the International Day for Natural Disaster Reduction, the world community should be aware that under the mullahs’ control, every natural disaster and every preventable problem, from the COVID-19 outbreak to floods and earthquakes, becomes a great catastrophe. To put it another way, as long as the mullahs are in charge in Iran, natural calamities will wreak havoc on the lives of the Iranian people.