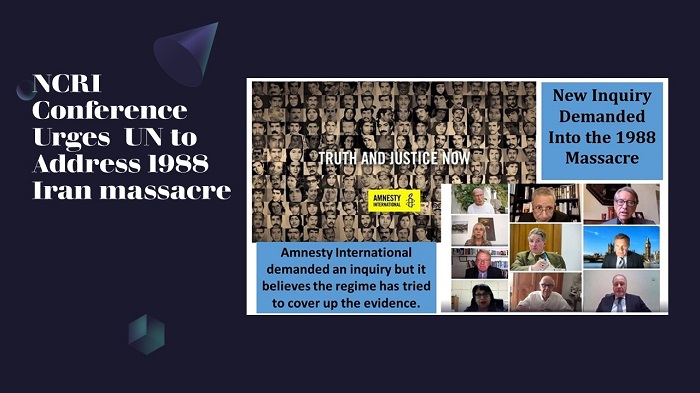 The National Council of Resistance of Iran (NCRI) held an online conference on Saturday to speak about the ongoing need for an international investigation into the 1988 massacre of 30,000 Iranian political prisoners, mainly members of the People’s Mojahedin Organization of Iran (PMOI / MEK Iran).

The conference participated in by former political prisoners, relatives of the victims, and MEK members, condemned the regime’s silence on the massacre and the international community’s willingness to look the other way.

The survivors and eyewitnesses advised that these executions followed long periods of torture and harassment of their families. One speaker lost four relatives and said that his daughter was arbitrarily arrested to punish him for his support of the MEK.

Four members of my family were executed during the 1988 massacre. My daughter Nasrin was arrested on charges of supporting the PMOI/MEK. She hadn’t done anything.#NoImpunity4Mullahshttps://t.co/Zrb6GPwII8

It is no surprise that the MEK were the main targets of the massacre. Supreme Leader Ruhollah Khomeini issued a fatwa against them for “enmity against God”, convening “death commissions”, and sentencing them to immediate execution. At their show trials, the prisoners were asked just one question: “Do you support the MEK?” Even children and pregnant people were hanged by the dozens. How can it be any clearer?

This was all acknowledged in a leaked audio recording between Khomeini’s second-in-command Ali Hossein Montazeri and the Tehran Death Commission, with Montazeri condemning the massacre and warning that the regime would go down in history as criminals. He was subsequently stripped of his position and put under house arrest until his death in 2009. The Death Commission members, including current-Judiciary Head Ebrahim Raisi and current-Justice Minister Alireza Avaie, were protected by the regime.

The regime has continued this malign activity ever since,  killing over 1,500 peaceful protesters during the November uprising last year, while at least more have been tortured to death or given execution sentences.

This is especially important ahead of the 75th session of the United Nations General Assembly next month, which must address the massacre.

At the conference, British MP David Jones said: “[The massacre] not only lays bare the international community’s inexplicable failure to uphold and defend international law enacted to prevent genocides and massacres but also highlights a worrying culture of impunity for serious human rights abuses in Iran.”

There will be no end to human rights violations if perpetrators are rewarded & promoted based on their atrocities instead of facing prosecution, as it is clearly the case in Iran.#NoImpunity4Mullahs#1988Massacrehttps://t.co/PdjAmsvBqF

The NCRI said: “The mullahs have been relying on that impunity for a very long time… The UN Human Rights Commission will no doubt be adopting another resolution in the upcoming session which condemns Iran’s human rights record. But if that resolution is to have any more power than its many predecessors, it should also endorse the growing appeals for an UN-led inquiry into the 1988 massacre, with the ultimate goal of filing charges against death commission members and other known perpetrators of what many experts have described as a crime against humanity.”

In the summer of 1988, the Iranian regime committed a heinous crime and massacred 30,000 political prisoners, the…