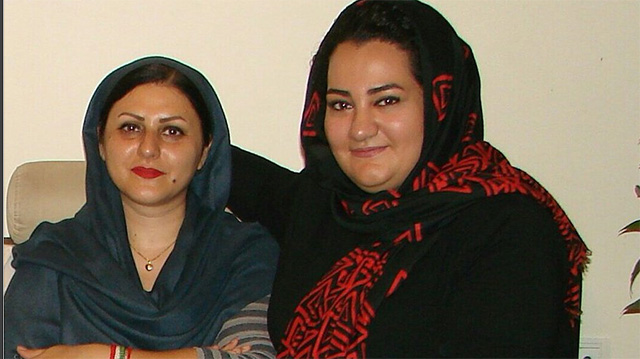 In a statement released on February 7th, Amnesty International demanded that Iranian authorities must immediately and unconditionally release human rights activists and her husband Arash Sadeghi. It has been reported that all three have begun hunger strikes following the transfer of Atena Daemi and Golrokh Ebrahimi Iraee to Shahr-e Rey (Gharchak) prison in Varamin outside Tehran.

Shahr-e Rey (Gharchak) prison was once used as a chicken farm. Today it holds several hundred women who have been convicted of violent offenses. It is notoriously overcrowded, and its conditions are unhygienic — without access to safe drinkable water, decent food, medicine and fresh air. Reports of assault towards inmates, both by other inmates and prison staff, as well as drug use and infectious diseases are common.

Magdalena Mughrabi, Deputy Middle East and North Africa Director at Amnesty International said, “The appalling conditions in Shahr-e Rey (Gharchak) prison place Golrokh Ebrahimi Iraee and Atena Daemi – both wrongly imprisoned for their peaceful human rights activism – in serious danger of assault, violence and exposure to infectious disease in addition to overcrowding and poor sanitation. We have grave concerns for their safety and well-being. No one should be imprisoned in such appalling conditions.”

After their transfer to Shahr-e Rey from Tehran’s Evin prison on January 24th, Golrokh Ebrahimi Iraee and Atena Daemi said that when they protested that their transfer was illegal and violated Iran’s own regulations on the separation of different prisoners’ categories, male prison guards physically and verbally assaulted them. They say they were kicked and punched, and subjected to sexual slurs. The women have been on hunger strike since then.

Human rights activist and prisoner of conscience, Arash Sadeghi, husband of Golrokh Ebrahimi Iraee, has also been on hunger strike since January 27th, demanding the return of his wife and Atena Daemi to Evin prison, pending their release.

“We are extremely concerned about Arash Sadeghi’s critical health as he protests his wife’s cruel and illegal treatment by the Iranian authorities. His body has already been weakened by previous hunger strikes and this protest could endanger his life,” said Magdalena Mughrabi, who added, “This incident further demonstrates the horrendous environment for those who dare defend human rights in Iran, where any form of dissent or peaceful activism is criminalized by the authorities. Arash Sadeghi, Golrokh Ebrahimi Iraee and Atena Daemi are prisoners of conscience who have bravely dedicated their lives to building a more humane and just society. It is appalling that they are so viciously punished for their steadfast commitment to human rights. They must be released immediately and unconditionally.”

During a search of the home of Arash Sadeghi and Golrokh Ebrahimi Iraee, an unpublished, fictional story about the practice of stoning women to death for adultery was found. Golrokh Ebrahimi Iraee is serving a three-year prison sentence for writing it. For her peaceful activism, including charges related to distributing anti-death penalty leaflets, as well as posts on Facebook and Twitter criticizing Iran’s execution record, Atena Daemi is serving a seven-year prison sentence.

This is not the first time that Arash Sadeghi has staged a hunger strike in defense of his wife. When his wife was first imprisoned in October 2016, he went on a prolonged hunger strike. Doctors advised long-term hospitalization and treatment by specialists for his worsening health problems. He is unable to eat solid food, and has severe digestive, kidney and respiratory complications, abdominal bleeding, and heart arrhythmia.

Amnesty International has previously stated that lack of proper medical treatment is an abusive practice that amounts to torture. In September 2017, Amnesty launched a campaign to urge Iranian authorities to stop their crackdown against those defending human rights and allow them to work without fear of persecution.