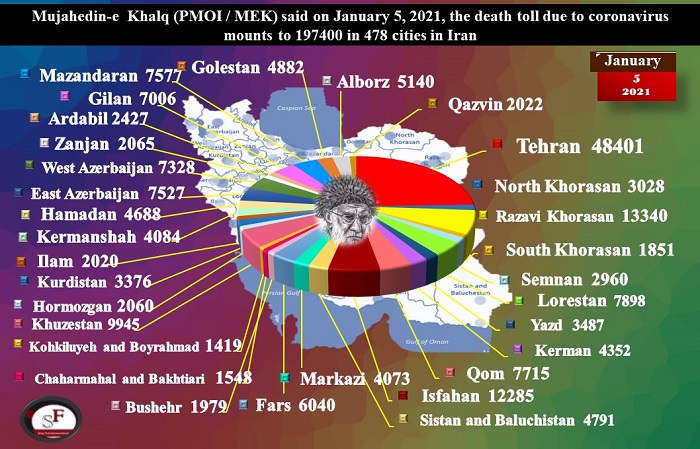 The death toll from Covid-19 in Iran now sits at near 200,000. The figure of 197,400 obtained by the Iranian opposition the National Council of Resistance of Iran (NCRI), and the  People’s Mojahedin Organization of Iran (PMOI / MEK Iran)’s sources in Iran is over three times the figure released by the Iranian regime.

Just to add to the misery it has been announced that the more highly contagious variant of the virus has arrived in Iran from its source in Britain.

More than 197,400 people have died of the novel #coronavirus in 478 cities checkered across all of Iran's 31 provinces, according to the Iranian opposition PMOI/MEK.

Tehran remains the virus hotspot with 48,401 recorded deaths from Covid-19 in the capital city. Isfahan with 12,285 and Qom with 7,715 have the next two highest death tolls.

The fudging and dithering over the response to the virus have undoubtedly caused a far higher death toll in Iran than it should have been.

The mullah regime alternates between boasting and lying over the response to the disease. While other countries are trying their best to control the spread of the disease and minimize the loss of lives, the Iranian regime appears not to care.

How is it that Vietnam, a far poorer country than Iran, geographically close to the country where Covid-19 originated and with a greater population than Iran, has had far fewer infections and deaths? The answer lies in the differences between the two countries’ governments’ priorities. In Vietnam, the health of its people comes first. In Iran, the wealth of its officials and rulers, the funding of terrorists, and the quest for a nuclear bomb are all more important, it seems.

More than 197,400 people have died of the novel #coronavirus in 478 cities checkered across all of #Iran's 31 provinces, according to the Iranian opposition PMOI/MEK. pic.twitter.com/w8oON6BYvg

The latest fiasco is the rollout of Iran’s vaccination program. “We are among the leading countries in vaccine production and other necessities to provide care for coronavirus,” boasted Ali Rabie, Hassan Rouhani, Iran’s president’s spokesperson said on Tuesday.

“There can be no forecasts in this regard until we actually begin vaccination across the country,” said a senior official of Tehran’s Khomeini Hospital by contrast on the same day. “I hope 70 percent of the society is vaccinated in a few months in order to establish safety against this virus,” he added.

The main controversy is over whether Iran will roll out an unproven locally manufactured vaccine that hasn’t even gone through clinical testing or pays for a more expensive vaccine already approved elsewhere. According to a Sharq daily article, the regime has “not only refused to purchase Covid-19 vaccines, but it also intends to unveil a vaccine that has just recently begun its clinical testing stages. This means even more Iranians contracting the virus and dying.”

Health Minister, Saied Namaki, mentioned the detection in Iran for the first time of the new variant of the Sars-Cov-2 virus that emerged in Southern England. “The first case of the mutated virus has been found in an individual returning from the UK,” he said.

Alireza Zali, the head of the Tehran Covid-19 Task Force, identified the nation’s public transportation system as a key route for virus transmission. Air pollution has also been identified as a major contributor to infection response. The higher the pollution levels, the easier it is for the virus to get a hold of someone if transmission occurs.

The dean of the Khuzestan Medical Sciences University explained that “air pollution is a significant factor in intensifying underlying illnesses, including those related to the heart, the blood system, and lungs. This has a direct and indirect impact on the Covid-19 death rate.”

9 patients died in Golestan province in the last 24 hours and the situation in the hospitals there is described as “fragile.” The emergence of Covid-19 has also occurred again in Yazd province according to an official of the Yazd Medical Sciences University. “During the past few days, the number of patients being hospitalized has doubled in comparison to previous days,” he was reported as saying.

Mrs. Maryam Rajavi is the President-elect of the National Council of Resistance of Iran’s (NCRI): The mullahs ruling Iran facilitated the spread of Coronavirus and did not make any serious efforts to contain it. This is why the pandemic has turned into a source for hidden escalation of fury and anger.