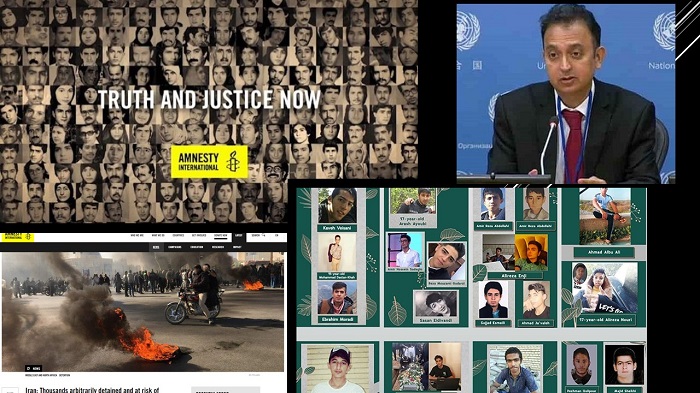 A new report recently published by Javaid Rehman, the United Nations Special Rapporteur, on the situation of human rights in Iran, has exposed crimes committed by the Iranian security forces.

One key feature of the report was how protesters in November 2019, who were outraged by outlandish fuel price rises, were treated. The report said that hundreds of protesters lost their lives; thousands were detained without charge and subsequently tortured. Some were even executed.

The Special Rapporteur said he was alarmed by the violent crackdowns suffered by protesters, many of which led to the loss of life. The report also showed horror at the way relatives of the detained protesters were treated. When they tried to speak out about the treatment of their loved ones they were told to stop speaking. Javaid Rehman alluded to the treatment of protesters following the downing of the Ukrainian jet in January by condemning the violence allegedly used to silence the protesters. This is his mind was undemocratic and a breach of rights to freedom of speech. Rehman has published his comments in the 75th General Assembly of the United Nations recent report.

Rehman’s shock was based on the following statistics:

‘’304 people, including 23 children and 10 women, were killed between 15 to 19 November 2019 in 37 cities across the Islamic Republic of Iran, although the death toll is believed to be much higher. Most of the deaths were reported in Tehran (130) and Alborz (33) provinces, as well as the majority ethnic minority provinces of Khuzestan (57) and Kermanshah (30).’’

The People’s Mojahedin Organization of Iran (PMOI /MEK Iran) declared that there have been at least 1500 killed in the November 2019 uprising in Iran which began on 15 November 2019. MEK Iran also released the names of 504 slain protesters.

#FreeAllProtesters
In his report released on Feb19, Javaid Rehman wrote that according to reports, detainees in #Iran are being tortured or suffer other forms of ill-treatment, sometimes to extract forced confessions https://t.co/qf9vxEYpEN

Rehman was disturbed by the deaths of 22 boys and 1 girl. On 16th November, 15-year-old Mohammad Dastankhah was killed on his way home from school in Sadra, by Basij forces who fired shots from a nearby rooftop. In addition, a 17-year-old boy, Mohsen Mohammad, was killed at the November protests in Khorramshahr. One of the worst features of these deaths was the way that shoots to kill was the decision made by the shooters as the victims suffered fatal wounds to the neck or head and in some cases to their vital organs.

Despite the fact the regime said the shootings took place as actions of self-defense because the security forces involved were a target of the attack, this was proved to be a lie. This is because the protesters had no capacity to harm anyone as they were unarmed. Eyewitnesses confirmed that the police, Basij, and Islamic Revolutionary Guard Corps security forces were the ones who were shooting to kill, not the peaceful protesters. The regime tried to pretend that there were forces involved who were pretending to be government officials as they were dressed in government-issued attire and were using weapons that had not been issued by the state.

‘’This report was submitted to the Secretary-General on 21 July 2020 for submission to the General Assembly. The UN General Assembly begins on September 15 with the participation of the Heads of State.’’

Just a couple of days ago, Amnesty International published an in-depth report on the November protests. This report contained incidences of rape, torture, and enforced disappearances of protesters who were merely protesting unreasonable hikes in fuel prices.