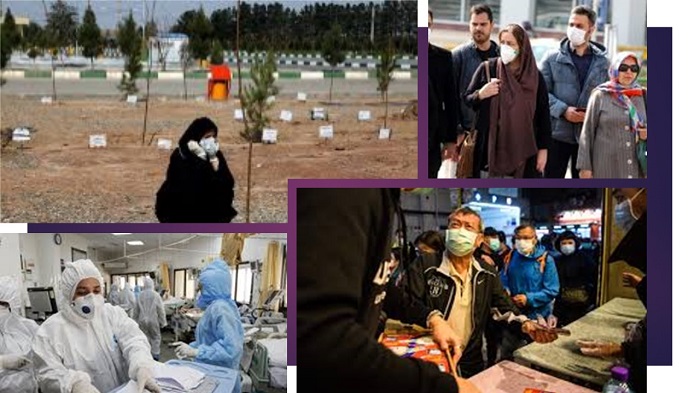 Jennifer Jones-Kelley: The National Council of Resistance of Iran (NCRI), and the People’s Mujahedin of Iran (PMOI / MEK Iran), reported that the fourth wave of coronavirus hospitalizations in Iran has strained the country’s healthcare system to its limit and filled hospitals to capacity. On April 24, Iranian regime President Hassan Rouhani warned that another mutation of the coronavirus may have reached the country, causing many to fear another spike in Covid-19 deaths.

“Today, we are facing another danger, and that is the Indian virus, which is worse than the British, the Brazilian, and the South African strains. If the virus enters the country one more time, we will have a big problem,” Rouhani said.

“The statistics are worrying. We will not get rid of this peak easily,” he added, in a reversal of earlier statements in which he minimized the threat of the deadly virus.

Rouhani ignored the government’s role in allowing the virus to spread unchecked and focused instead on tightening enforcement of minor measures. He said: “State Security Forces and law enforcement will tighten control in offices.”

No travel restrictions during Nowruz

Rouhani’s rhetoric about enforcement of coronavirus precautions rings inauthentic to those who were dismayed by the regime’s decision to allow travel with no restrictions during the Persian New Year (Nowruz) holiday in March.

On April 26, Setareh Sobh described the government’s role in causing the fourth wave: “The current situation of the spread of the virus in the country is catastrophic. The fourth wave of Covid-19 began when officials allowed people to travel, shop, and visit during the New Year holidays.

If there was the slightest determination and concern on the part of the decision-makers against the virus, they would not allow this amount of traffic and disregard the protocols. The country was supposed to be closed for two weeks; we still see that these closures have not been fully implemented, and most of the departments are working with a lot of staff. Just look at buses and subways. Buses and subways are filled with employees and workers who must go to work.”

In January, Supreme Leader Ali Khamenei banned the purchase of U.S. and U.K.-made vaccines, thus cutting off the country’s access to a large supply of effective, WHO-approved vaccines. Instead, the government has paid to import a small number of vaccines from China, Russia, and India. Few of Iran’s 80 million citizens have been vaccinated as a result.

The regime vowed to manufacture its own vaccine, which it has so far failed to do. The rest of the world’s vaccines were produced in partnership, using unlimited funding, advanced equipment, and full teams of highly trained scientists. These elements are nearly impossible to achieve in Iran because of the country’s isolation, poverty, and brain drain. Iran has chased its most brilliant scientists away for decades because of the country’s corruption, misogyny, and neglect of all industries other than petrochemicals.

On April 26, the state-run Jahan-e-Sanat daily wrote, “The development of domestic vaccines and their clinical efficiencies takes time, and there are no signs of improvement.”

Iran has no public vaccination program, and even healthcare workers who are in direct contact with Covid-19 patients are not guaranteed a shot. The Iranian Nursing Association says that 80 percent of nurses working in hospitals have still not been vaccinated.

Unsurprisingly, the few doses that exist are being sold on the black market for exorbitant prices or stolen from their intended recipients. MEK sources report that doses intended for municipal workers were stolen by provincial authorities and given to their families. In Abadan and Aliabad Katoul, northern Iran, the vaccine doses meant for municipal workers were given to municipal managers, city council members, and other officials.

The regime’s newest plan is to sell the vaccine under the cover of its charity, the Red Crescent, despite the fact that the Covid-19 vaccine was intended to be distributed at no charge to individual citizens.

The latest mutation to reach Iran will hit a country that is unprepared and unprotected. Every country in the world has made mistakes in handling the pandemic, but most have learned from these mistakes and tried to adapt.

Iran doubles down on its mistakes, and its people pay with their lives. The Iranian regime’s response to Covid-19 has been serious of human rights abuses and should not be ignored by the international community. When a dictator refuses medicine for his people, we can’t look away. We need to investigate.