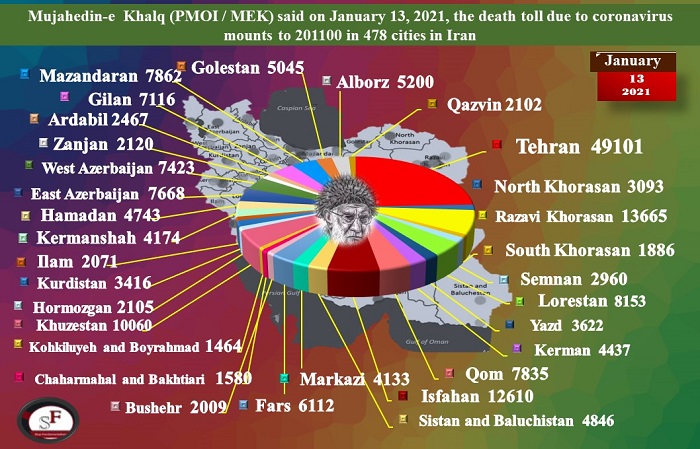 The numbers of Iranians who have sadly perished because of Covid-19 has surpassed 201,100, although the official figure released by the regime is only a third of what the Iranian Opposition, the National Council of Resistance of Iran (NCRI), and the People’s Mojahedin Organization of Iran (PMOI / MEK Iran) has been able to carefully calculate from sources within Iran.

The five highest fatality figures for cities or districts in Iran are in:

More than 201,100 people have died of the novel #coronavirus in 478 cities checkered across all of Iran's 31 provinces, according to the Iranian opposition PMOI/MEK.

The regime’s highest officials continue to procrastinate over the pandemic response while the regime’s own Health Minister, has been more sanguine. He has made these comments on the fatality rate recently:

President Rouhani has been back-pedaling on the promise to vaccinate Iranians. “Be it a domestic vaccine or purchasing vaccines from reliable companies that are 100 percent trustworthy, the government will most definitely take the necessary measures in this regard,” he said recently. “The government has placed a request with COVAX to purchase the vaccine and has deposited the money.

Millions of doses of the vaccines have been purchased through this route… We are also seeking to procure the vaccine from other sources. Aside from COVAX, there are other vaccines available for us and the Health Ministry will procure them. Today the Central Bank announced in an official meeting that there is no issue in depositing the money and procuring the vaccine.”

The regime’s parliament or Majlis has surprisingly rejected the world’s most effective vaccines and has said that it will not take vaccines from the E.U., U.K., or the U.S. as they are “unreliable.” “If officials are forced to import the vaccine approved by COVAX, firstly the type, quantity, when and from what country this vaccine is imported from should be precisely specified and announced publicly.

Secondly, the importers of this vaccine should first test their vaccines on themselves and their family members, and if it is confirmed to be without any risk, it should then be placed at the people’s disposal,” the Majlis was reported as stating. Officials in Parliament say that whatever the vaccine provided by Covax is that is what will be used in Iran. However, it was also stated that any vaccine imported into Iran should first be administered by the importers to show that it is safe to use.

The link between air pollution and resilience to Covid-19

It has been widely known for years that air pollution in major cities can affect people’s health, especially respiratory problems. According to Ali Reza, the head of the Tehran Covid-19 Task Force, “there is a direct connection between air pollution, the rise in Covid-19 cases, those being hospitalized for coronavirus and the escalating death rate. In Tehran, we are facing a variety of air particles, each having a negative impact on the locals. Most certainly a shutdown for a few days can help the current circumstances. Public transportation in Tehran plays a significant role in the issue of air pollution and Covid-19, and there is a need to find supportive solutions. A budget needs to be allocated for this matter.”

The state-run media outlet, Salamat News, reported that more than 350 staff at Tehran’s Tajrish Hospital have been infected with Covid-19 so far.

Mrs. Maryam Rajavi is the President-elect of the National Council of Resistance of Iran’s (NCRI): The delay in purchasing and importing the COVID19 vaccine is the continuation of the mullahs regime’s criminal policy, which will continue to claim more victims among the deprived and oppressed people.