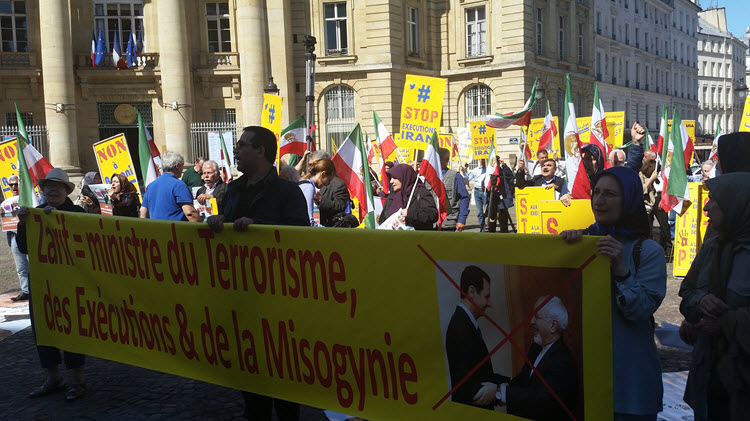 June 22nd 2016, Iranians living in Paris protested in conjunction with the visit from the Iranian regime’s Foreign Minister, Javad Zarif. They held a protest against the widespread medieval style executions that are actively taking place in Iran. The protestors also voiced their thoughts on the mullahs’ continued and unwanted interference in Syria.

Despite the world powers’ nuclear deal with the Iranian regime, Hassan Rohani’s government still continues to torture and hang prisoners. Iran remains the number one state executioner In the Middle East and Africa, accounting for over 82% of all executions in the region last year alone.

Furthermore, the mullahs’ regime provides the main backing for Bashar al-Assad’s regime which is responsible for massacring innocent people in Syria on a daily basis. In turn, adding to the global refugee crisis that sees thousands of innocents, homeless and separated from loved ones.

Zarif is the representative of the mullahs’ Supreme Leader Ali Khamenei, helping to voice and conduct his extremist agenda.

Representatives of Franco-Iranian associations, along with human rights organizations participated in the rally in Paris. It took place at Place de Panthéon on Wednesday at 10.30 am to condemn the presence of Javad Zarif in France.

Participants in the gathering joined the 270 Members of the European Parliament, who called last week on EU countries, including France to break relations with Iran’s regime, asking for the country to halt all executions with immediate effect. At the rally, protesters urged the international community to put an end to the Iranian regime’s constant interference with their Revolutionary Guards that are posted to Syria and actively causing turmoil to innocent people in an already unstable war torn region.

They also declared their support for the major “Free Iran” gathering that is scheduled to take place in Paris on July 9th 2016. If human rights issues are close to your heart, then make sure not to miss out on being able to voice your opinion. Attend the Free Iran gathering next month. Your presence could make a difference. Help to save the lives of innocent people.