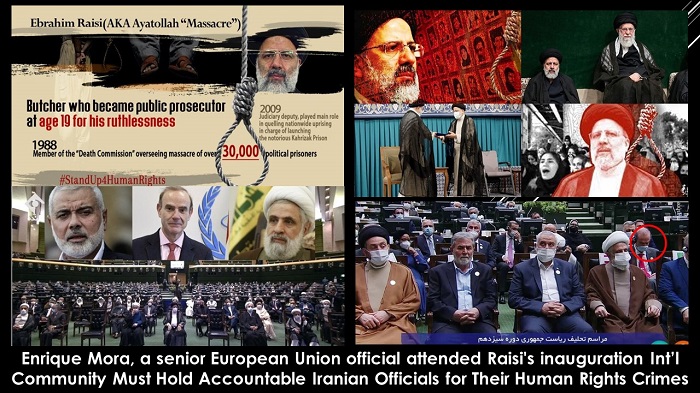 The People’s Mujahedin of Iran (PMOI / MEK Iran), and the National Council of Resistance of Iran (NCRI) reported that on 5 August the inauguration day for the Iranian regime’s new president, Ebrahim Raisi took place.

It comes at a time when countless Iranians both inside Iran and throughout the world are memorializing the 30,000 people who were sentenced to death between July and September in the 1988 massacre, following Khomeini’s infamous fatwa that declared members of the People’s Mujahedin of Iran (PMOI / MEK Iran) ‘Enemies of God’.

Impunity in the face of all of its malign activity

The overlap of these events emphasizes the message delivered to the international community by human rights advocates and the Iranian Resistance shortly after Raisi’s June 18 “election”: the Iranian regime is demonstrating its clear expectation of impunity in the face of all of its malign activity by promoting its worst human rights abusers.

Already, as chief of the judiciary, he oversaw a far greater use of the death sentence in a country known for having the highest number of executions per capita in the world.

When inhabitants of nearly 200 Iranian cities and towns staged mass protests in November 2019, Raisi was a key figure in the subsequent response, that killed a total of 1,500 people and torture thousands more.

Raisi’s ascension to the regime

Raisi’s ascension to the regime’s second-highest position provides him even more authority to guide authorities toward outcomes that harken back to 1988.

The November 2019 uprising as well as the preceding uprising in January 2018 both expressed support for regime change.

Participants from all walks of life chanted “death to the dictator” and called for an alternative to the political “game” that Iran’s mainstream political groupings had been playing for much of the past 40 years in both situations.

People have been seen reiterating and expanding on this sentiment in some of the most recent protests in Khuzestan Province, which were caused by water shortages, often expressing clearly, “We do not want the Islamic Republic.”

Mrs. Maryam Rajavi, the Iranian opposition’s president-elect, recently stated that the Raisi period will be marked by an unparalleled surge in “hostility and enmity between the Iranian regime and society,” which can already be seen in Khuzestan and a dozen other provinces.

The international community, on the other hand, must understand that Iranian officials are engaging in a pattern of violent repression. At least a dozen protesters have already been killed, and the mass arrests that have accompanied them generate legitimate concerns that Raisi’s actions in 2019 and possibly also in 1988 will be amplified by the entire regime.

However, this is no excuse for Western democracies to remain silent when Tehran murders those who are calling for freedom and rewards those who have committed heinous crimes against humanity on behalf of the regime. The international community should formally investigate such crimes and consider prosecuting those who committed them if only to demonstrate that similar behavior will not be tolerated in this new era.