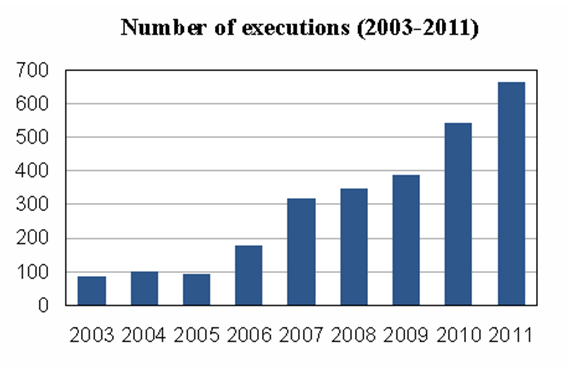 Stop Fundamentalism – Ahmad Shaheed, the UN Special Rapporteur on the situation of human rights in the Islamic Republic of Iran, released a new report on March 6 about the country’s deteriorating human rights situation.

Mr. Shaheed regretted that the government of Iran did not allow him to visit the country on 19 September.

In his report, Shaheed urged the Iranian authorities to give “positive consideration to his request” for a visit to allow his “unfettered access to the country to carry out his mandate.”

Shaheed, travelled to Geneva, 3-7 October 2011, to meet and interview several victims and NGOs, which included those sympathetic to the Iranian regime.  Mr. Shaheed then traveled to France, Germany and Belgium on 30 November through 8 December 2011 meeting other NGOs and some 80 individuals who had been victims or witnesses to human rights violations in Iran.

“Many of the allegations received contend that the rule of law meant to protect human rights is frequently breached,” said the UN Envoy in his report about conditions in Iran.

Shaheed said in his report that those victims he interviewed had faced electric shock, beatings, threat of rape, threats of family members and friends being hurt.  His report also says that those arrested had to confess in front of TV cameras.

Iran Rapporteur also indicates in his report about people being kept in solitary for months without any reasons or allegations, moved around being blindfolded, prevented access to family and lawyers.

Shaheed described the conditions of Iranian prisons to be lower than that of United Nations’ standards.  Over crowdedness, lack of enough water, bad hygiene and dangerous air-conditioning and low access to medical care were described as characteristics of Iranian prisons.

Shaheed also stressed that Iran, more than any country, has imprisoned journalists.  He also called on this country’s ruling clerics to stop executing people who have committed their crime before the age of 18.