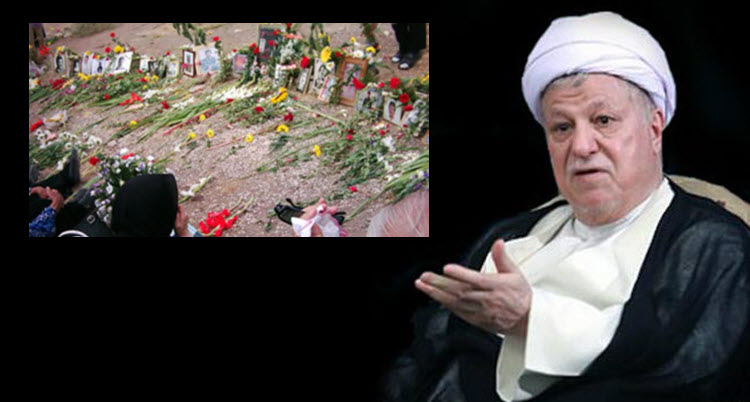 An article by The National Council of Resistance of Iran (NCRI) on August 28, speaks to the growing domestic and international support for the Iranian Resistance.

A month has passed since the campaign to seek justice for the victims of the 1988 massacre of 30,000 political prisoners in Iran was launched. Just two weeks ago, an audio recording of Mr. Hossein-Ali Montazeri’s meeting with the Death Commission, was pubished.

The escalation of domestic and international denunciations of this crime left Rafsanjani and Khamenei no choice but to break their silence and express concern over the desacralization of Khomeini within the regime, and the growing support for the People’s Mojahedin Organization of Iran inside the country and abroad.

On Saturday, August 27, a meeting was held.  Akbar Hashemi Rafsanjani, president of the State Expediency Council, spoke out against the new attacks directed at Khomeini and said, “The wave has embraced virtually all foreign opposition media, to the extent that the mayor of Paris recently held an exhibition which recreated the scenes of executions in those days… The extent of support for the Mojahedin Organization at this time merits being pondered.” He added, “The main objective of our international and domestic enemies is to take revenge from the unprecedented role and status of Imam (Khomeini) in contemporary history of Iran and the world.” Rafsanjani added, “We must act vigilantly and describe the Imam’s path in a way that it could not be abused by opponents.”

In an earlier meeting on August 24, with the regime’s officials, Ali Khamenei pointed at the audio recording of Mr. Montazeri and expressed his concern over “efforts to whitewash the Mojahedin.” He said, “Unfortunately, some people are trying to create an atmosphere of innocence for criminals and distort the radiant image of the late Imam (Khomeini).”

Rouhani’s legal deputy and member of the State Expediency Council,  Majid Ansari, told the council’s meeting, “In addition to distortion of Khomeini’s image, a complicated conspiracy is being concocted on the international level to present the People’s Mojahedin Organization as a legitimate and civilian organization.”

In a televised speech on August 26, Mehdi Khazali who worked at the presidential office under Khamenei and Rafsanjani, revealed new information about the scope of the 1988 massacre. He said, “The largest and most populous group which opposed the state was the People’s Mojahedin Organization… It could be annihilated only by authorization from the Imam (Khomeini). In fact, they wanted to uproot this group while the Imam was still alive. They said that if anyone was released, he/she would become a renegade; then we would be entangled in a situation where we would be facing a large number of people. So, we execute these people, and these executions would terrify the families and no one would dare to become a renegade.”  Khazali added, “According to an Intelligence Ministry directorate, some 20,000 people (were executed) in Tehran and provinces. This means that the 4,000 (mentioned by Mr. Montazeri) belonged to Tehran and according to someone like Mr. Maleki, nearly 33,000 people were hanged in the matter of a month or so, or 30 something days.” (Dr. Mohammad Maleki was the first chancellor of Tehran University following the 1979 revolution.)