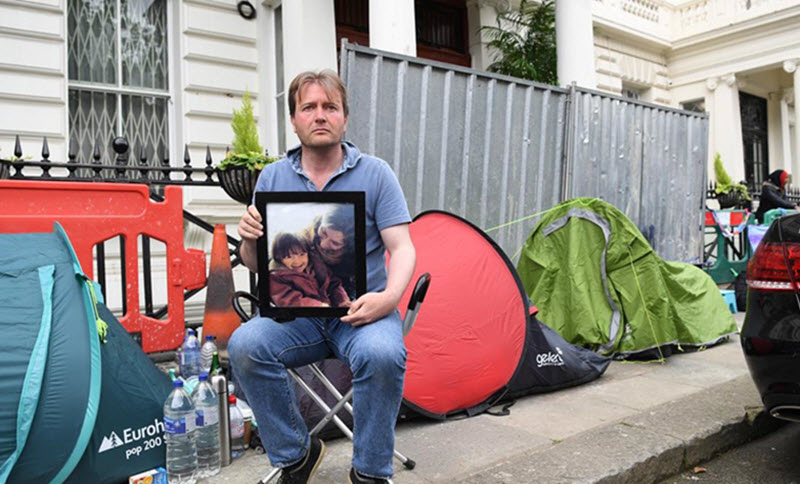 The People’s Mujahedin of Iran (PMOI / MEK Iran), and the National Council of Resistance of Iran (NCRI), reported that the family members of Uk citizens imprisoned in Iran staged a demonstration outside UK Prime Minister Boris Johnson’s office on Friday, accusing the government of doing too little to win their loved one’s release.

The same day, Boris Johnson issued a statement on Twitter commemorating the four-year anniversary of the arrest of Anoosheh Ashoori in Tehran.

Johnson tweeted, “I continue my appeal for Iran to do the right thing and release him immediately.” His critics, however, are concerned that his government is leaving the matter in the hands of the Iranian government, deferring to the clerical regime’s position that Ashoori and other dual nationals are citizens of the Islamic Republic and thus subject only to the Iranian judiciary’s laws and processes.

Tehran does not recognize dual citizenship

While other countries, such as the United Kingdom, allow dual nationals jailed in their home country to get consular aid from their home country, Tehran does not recognize dual citizenship and often denies this consideration.

In one recent case, the British government attempted to counteract this trend by stating that Iranian-British charity worker Nazanin Zaghari-Ratcliffe would be given full diplomatic protection. Tehran slammed the action, accusing Downing Street of further complicated the case of a 42-year-old mother accused of plotting the overthrow of the theocratic government while visiting her parents in Iran with her three-year-old daughter.

Nazanin was re-arrested on fresh charges

Zaghari-five-year Ratcliffe’s term ended in March, but she was forbidden from returning to the United Kingdom, where her daughter had returned to start kindergarten while living with her father, Richard Ratcliffe. In April, Nazanin was re-arrested on fresh charges and sentenced to another year in prison.

The Islamic Republic has a lengthy history of prolonging politically motivated punishments arbitrarily. There is no evidence that this outcome influenced the UK’s decision to offer diplomatic protection to the detainee. Tehran is more likely to hold all available British nationals hostage in the hopes of obtaining compensation from the British government in the form of prisoner swaps or financial gains, such as the repayment of a £400 million debt stemming from canceled arms sales prior to the Iranian revolution in 1979.

Similar charges have been leveled at a number of Western institutions as Iranian authorities continue to escalate their hostage-taking strategy in the face of rising international concerns.

At the moment, there are at least 16 dual nationals arrested in the Islamic Republic, while the true number is likely much higher. In such cases, Tehran reacts to the mere possibility of publicity in the same way it reacts to the prospect of diplomatic protection: by warning that the detainee’s case will only become more complicated, and their release will become less possible.

The tendency of more rigorous prosecution of dual nationals

In conjunction with his social engagement, he and German-Iranian Nahid Taghavi were each sentenced to ten years in prison on vague charges of “participation in a banned group” and “propaganda against the state.”

There’s no doubt that the disparity reflects a long-standing tendency of more rigorous prosecution of dual nationals — a trend that’s only expected to intensify once Iran’s new president, Ebrahim Raisi, settles into office.