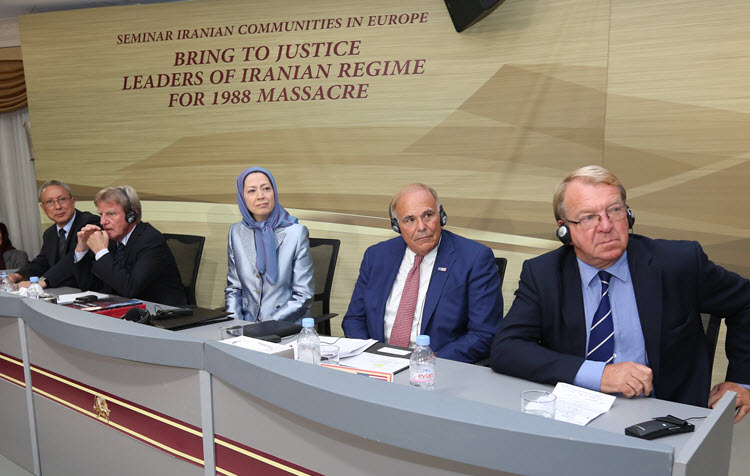 On the first day of the seminar of the Iranian communities in Europe, held on Saturday, September 3, 2016, at the office of the National Council of Resistance of Iran, in Auvers-sur-Oise, a number of international dignitaries participated and addressed the seminar.

Ed Rendell, Chairman of the Democratic National Convention in July 2016 and former Governor of Pennsylvania, and  Dr. Bernard Kouchner, former Foreign Minister of France, each spoke about their concerns.

Rendell noted “the horrifying massacre of political prisoners in 1988 and said, ‘What could be more galling than to hear that Iran’s current Minister of Justice was a member of the Death Commission in 1988?’ He said this shows how moderate, Rouhani’s cabinet is and a regime with such a minister needs to be prosecuted.” He added, “There is so much in common between what the MEK (PMOI) have fought for and what the original American patriots fought for… These people are standing up for an ideal.” He reiterated, “There is only one way that freedom will come to the people of Iran, and that is with regime change.”

Dr. Kouchner, said, “I ask myself what the human rights defenders were doing at the time (of the 1988 massacre)?” He called for a “special tribunal to prosecute the mullahs for their crimes.”

Dr. Kouchner added, “The massacres did not take place only in 1988. Iran continues to have the highest execution rate per capita. The executions have even increased after the nuclear deal.”

Mr. Struan Stevenson, President of the European Iraqi Freedom Association and former member of the European Parliament, also spoke before the seminar, ”What has happened about the 30,000 who were massacred in 1988? Nothing from the West at all. If the United Nations is to retain one ounce of credibility they must take this up at the UN Human Rights Council this month in Geneva. It must be a key item on the agenda. It must go before the UN Security Council. The perpetrators and murderers must be held to account; they must be brought to justice.”

President-elect of the Iranian Resistance, Maryam Rajavi was the keynote speaker. She called for the leaders of the Iranian regime to be put on trial for their crimes against humanity in Iran, by the international community and western governments, who have been silent too long about the massacre of 30,000 political prisoners in 1988. She also demanded the halt to death penalties, saying that all relations with the Iranian regime must be made contingent on this. She urged the people of Iran to rise in support and solidarity to expand the movement to bring justice to the 30,000 political prisoners massacred in 1988, underlining it as part of the campaign to overthrow the Iranian regime.