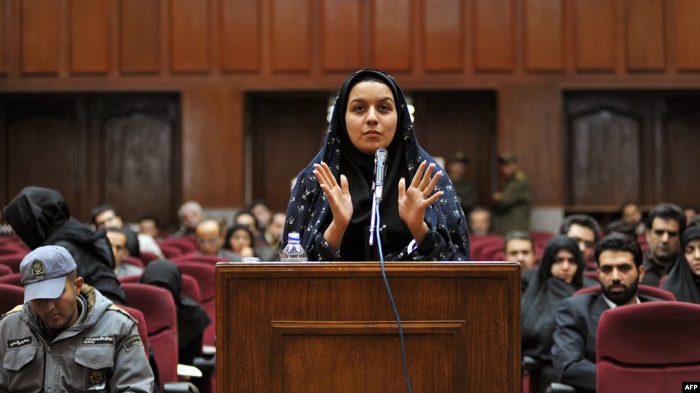 The anniversary of Reyhaneh Jabbari’s hanging execution in 2014 is October 25. Reyhaneh is a symbol for Iran’s defenseless women who are sentenced to death without due process. At the same time, she has become a symbol for courageous women who refuse to submit to the dictates of the Iranian authorities.

Reyhaneh was brutally tortured for “falsely” alleging that Morteza Sarbandi, a high-ranking officer in the Intelligence Ministry (MOIS), attempted to sexually assault her.

Reyhaneh described the religious regime’s severe discrimination against women, notably the judiciary officials, in her accusations from prison:

“My name is Reyhaneh Jabbari, and I am 26 years old. And I’m still wondering where girls who have been humiliated and insulted might seek sanctuary when they are sexually exploited and do not want to be slaves. Is there a government, a regular citizen, or any other responsible person who can help these girls?”

“When I was 21, I, Reyhaneh Jabbari, discovered that the male-dominated court did not approve of my defending myself against Sarbandi.

“They didn’t even put themselves in my shoes for a second, and they held the trial without paying attention to my words or investigating the reasons listed in my lawyers’ defense,” Reyhaneh continued, outlining the misogynist legal system to which Iranian women are subjected.

The execution of Reyhaneh Jabbari

“Judge Tardast savaged me with a humiliated expression on his face. He brazenly told me in one of the sessions that I should have let him rape me and then filed a complaint against him! “All of his questions were humiliating as if I were one of those women trapped in the prostitution cycle,” she went on.

The execution of Reyhaneh Jabbari was widely reported in international news agencies, including references to the Iranian regime’s blatant violation of human rights.

Reyhaneh Jabbari’s death was described by Amnesty International as “another bloody stain on Iran’s human rights record” and “an affront to justice.”