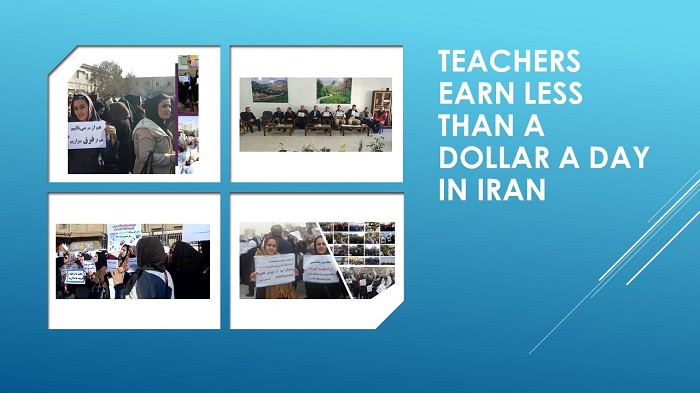 October 5th was World Teachers’ Day. Countries on this day honor teachers and the valuable services they offer.  Teachers in Iran fall well below minimum international standards and the regime has no respect for the occupation.

Status of teachers in Iran

Only Education Ministry teachers are considered to be officially hired but most teachers are not official employees of the Education Ministry. So unofficial teachers are hired on temporary contracts by intermediary private companies. The salaries paid are far less than the minimum wage approved by the Labor Ministry. In addition, they do not get any other benefits like insurance and overtime rates after working long hours.

December 23 – Tehran, #Iran
Retirees from across the country rallying outside the regime's Majlis (parliament) and holding a protest gathering coinciding with a nationwide strike by teachers.#IranProtests pic.twitter.com/ZeY6VPfACl

The Education Ministry despite being desperately short of teachers leaves it up to private companies to hire teachers to fill the gaps.

An Education Ministry official, Ali Allahyar Torkaman, said the teachers came from several sources such as from a stock of 58,000 freelance casual teachers, 3,600 conscript soldiers, and retired teachers and independent contractors.

Teachers’ salaries below the poverty line

Most teachers cannot survive off a teacher’s wage and must take on other jobs to bridge the gap.

The regime has increasingly been using private contractors to source suitable teachers. Typically, an intermediary private company hires the teachers, and the Education Ministry pays them to do this, but this doesn’t pay the teachers the full amount leaving teachers to exist below the poverty line.

Outsourced teachers get from 3 to 10 thousand Tomans for each teaching hour. They do not have job security or comprehensive insurance and they do not get paid for holidays. The conditions for teachers have got so bad that many do not get paid for months at a time. When they do get paid the salary for a year’s work is the same as the monthly salary for one to two teachers who are officially employed. Most outsourced teachers have education degrees but only earn between 24 and 30 thousand Tomans each day which is barely a dollar. They don’t get a contract on paper or benefits that other teachers receive,

The state-run Tasnim news agency recently revealed that outsourced teachers get less than as school janitor’s pay by only getting 3.5 million Tomans in the whole school year.

#Iran: Teachers Protest in Dozens of Cities and Towns Against Plunder and Repression by Mullahs' Regime
Condemn the repressive regime and take urgent action for the release of detained teachers pic.twitter.com/3ZQiSy72kl

Some teachers work in schools that call themselves non-profit so the annual teachers’ salary is below a million Tomans. For earning such a small amount, they use the following terms to describe their situations “slave,” “stepchild,” and “exploited. They are chosen by the Ministry of Education. They say the work they are expected to do is as much as the officially employed teachers but they do not get the minimum benefits such as insurance, access to the Educators’ Fund, housing loans, shopping coupons, etc.

Teachers’ protests and their stand against repressive rgm forces showed public anger & disgust at religious dictatorship and demand for change; “People join us, our problem is your problem”, “Teachers are imprisioned, extortionists are free”#Iran

Shockingly, six thousand educators were not able to pass the exams, destroying prospects for many who are advancing in age. The Iranian Resistance, the People’s Mojahedin Organization of Iran (PMOI / MEK Iran), drew attention to the case of the mother of four Ms. Tayyebeh Sharifi who committed suicide because she failed the exam.

The Iranian opposition the People’s Mojahedin Organization of Iran (PMOI / MEK Iran), and the National Council of Resistance of Iran’s (NCRI), called on international trade unions and educators to pledge their support to their peers across Iran and provide assistance to the protestors in any way they can.