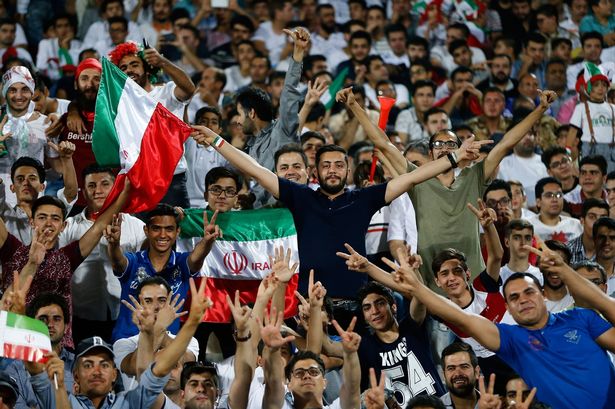 In January, Saudi Arabia lifted its long-standing ban on women in stadiums. This was good news for female fans, especially with the excitement over the World Cup coming up in Russia.

Meanwhile, in Iran, women continue to be barred from watching matches in stadiums, and if they attempt to, are detained by police. Still, Iranian women are enthusiastic soccer and volleyball fans.

Therefore, it was disheartening when FIFA president Gianni Infantino, who was in Tehran to preside over a match between top teams Esteghlal and Persepolis, attended a public event that excluded women entirely. Infantino wasted an opportunity to support Iran’s women by insisting that they be allowed into Azadi Stadium — a stadium that seats 100,000.

Indeed, at least 35 women and girls were detained by police outside Azadi Stadium, including teenagers and women dressed as boys. The risk of arrest is always present, but Iranian women have been protesting the ban for decades. Iran is the only country that bars women from sports stadiums.

Regarding the way Saudi Arabia’s recent lifting of their ban has affected Iranian women, journalist Negar Ehsan wrote, “I have to confess, after I saw the photos of Saudi women in football stadium, I feel like crying for two reasons: I was happy for Saudi women who were oppressed for so long and at the same time I was sad for how patient we have been.”

World sports bodies like FIFA can and should advocate for women’s rights. Infantino met with Iran’s president, Hassan Rouhani, and the country’s top sports officials. Many believe that he should have made his attendance at the soccer match conditioned upon women being allowed to attend as well. It was disappointing that FIFA condoned the segregated stadiums, where women risked arrest to cheer on their teams.

In 1981, women were first banned from attending soccer tournaments, and since then, Iranian women have made direct appeals to FIFA. Iran wants to host international tournaments, so FIFA has enormous leverage to insist that Iran stop the discrimination against women.

In fact, FIFA put in place its first human-rights policy and created a human-rights advisory board, last June. The policies clearly state that no discrimination against women is allowed. Article 3 of FIFA’s statutes states that “discrimination of any kind… is strictly prohibited and punishable by suspension or expulsion.” FIFA now has the right and responsibility to act.

Iranian women deserve to have FIFA’s support. Iran must be told that if it can’t adhere to global rules and admit women to matches, it cannot host FIFA events.

Iran’s discriminatory ban on women in stadiums is part of a larger pattern of gender discrimination and human-rights violations. Human Rights Watch has documented the discrimination in personal status laws such as marriage, divorce, child custody and even dress code, as well as hiring discrimination in the workforce, and restrictions on travel.