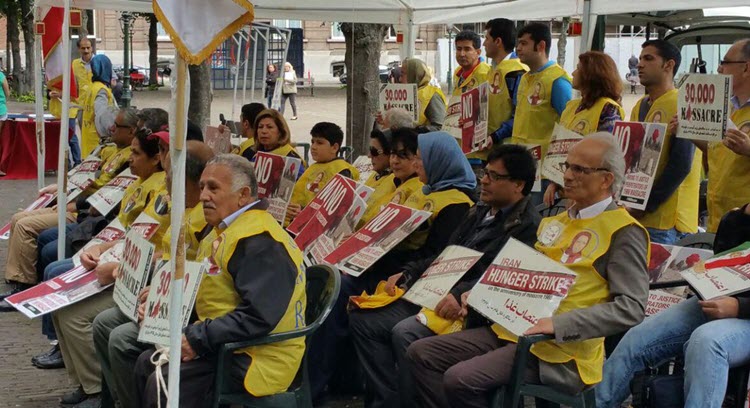 Iranian opposition activists in the Netherlands have held the first day of a three-day hunger strike and sit-in in front of Parliament to show their support for the Iranian Resistance and the prisoners who have been victim to the recent spate of executions in Iran. They are calling for an immediate halt to executions.

They point out that more than 2,600 people have been executed during the presidency of Hassan Rouhani who came into power in 2013. Several dozens of executions took place in the last two weeks alone.

The press release indicates that the hunger strike will start on Wednesday 10th August, coinciding with the anniversary of the 1988 massacre in Iran where over 30,000 political prisoners were killed. The prisoners were serving their terms at the time, but Khomeini, the founder of the theocratic regime, issued a fatwa resulting in immediate executions.

The Resistance supporters highlighted that most of the victims were activists of the People’s Mojahedin Organization of Iran (PMOI or MEK), the main Iranian opposition movement.

Amnesty International said the massacre was a crime against humanity. “The executions were ordered by Death Commissions appointed by Khomeini. Scores of the members of the Death Commission are cabinet ministers in the Rouhani government or currently hold other senior positions.”

“The participants will urge the Dutch government to categorically condemn the ongoing executions in Iran and act with its allies to call for an immediate halt to the executions and torture in Iran. They will also call on the UN Security Council to form an international court to prosecute those responsible for the 1988 massacre in Iran,” said a statement by the opposition activists in Holland.

The protest will continue outside the Parliament on 11th to 12th August from 10am to 6pm.