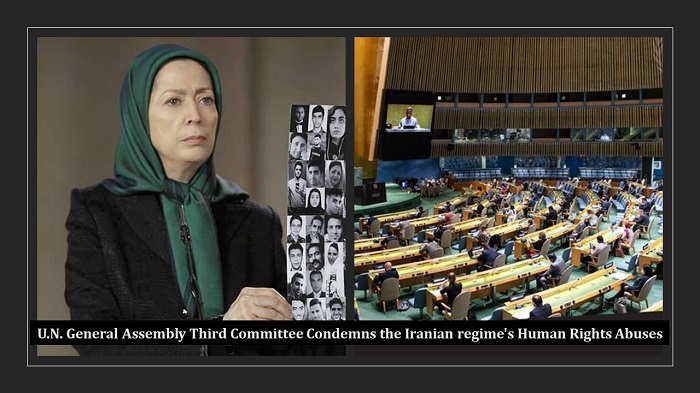 On Wednesday, the United Nations General Assembly adopted a resolution condemning the human rights violations of the Iranian regime. It was passed with 79 favorable votes. This is the 67th resolution on human rights proposed by the UN since 1979 ousting of the shah.

Other aspects of the resolution include arbitrary arrests regularly including detentions without charge and torture used to get confessions. This was used on Navid Afkari, known as a 5-star wrestler, who was executed in September. The resolution also mentions suspicious deaths in custody, enforced disappearances, and extrajudicial executions.

No freedom of expression in Iran

The UN also condemned the regime for suppression of expression and opinion, which also includes:

My statement, on behalf of @WorldJewishCong at the UN Human Rights Council yesterday: “The Iranian regime must be decisively condemned for its human rights abuses and be held accountable for its heinous crimes both domestically and across the Middle East.” pic.twitter.com/6cbmNywntr

It has reached the point now that the regime is only able to maintain power if it increases its repressive measures so as to discourage any further protests. This includes the murder of 1500 peaceful protesters in November 2019. Reuters confirmed in a special report on December 23, 2019, about the deadly crackdown on November nationwide protests in Iran the death toll of 1500 that was announced by the People’s Mojahedin Organization of Iran (PMOI / MEK Iran) on December 15, 2019.

The Iranian regime is not happy with the UN resolution. Ali Bagheri-Kani, the international deputy of the regime’s judiciary said he believed that the efforts made by a few countries to pass a resolution in the UN General Assembly Third Committee which is unfavorable to the Islamic republic is not legal and it doesn’t represent the reality taking place in Iran.

Today, @UN adopted a Canada-led resolution calling on 🇮🇷 to comply with its international human rights obligations. Canada remains committed to defending human rights and will continue to work with international partners to hold Iran accountable for its actions. pic.twitter.com/yNlBgILfPw

Bagheri-Kani also accused Canada, which has prepared the draft resolution, of being a human rights abuser.

After the release of the UN resolution, the National Council of Resistance of Iran (NCRI) and the People’s Mojahedin Organization of Iran (PMOI / MEK Iran) said that those responsible for many of the crimes turned the November 2019 uprising into a bloodbath which resulted in:

Mrs. Maryam Rajavi, the president-elect of the NCRI announced that she was pleased with the resolution and it showed the world that the regime has taken part in gross violations of human rights. She said it shows that the lack of respect for human rights in Iran did not fit in with the morals of the twenty-first century. She also said that impunity given to the regime’s criminal leaders should end immediately.

What has also concerned Mrs. Rajavi is the lack of international investigation into the regime’s crimes, such as those in the November 2019 protests and the 1988 massacre of 30,000 political prisoners.