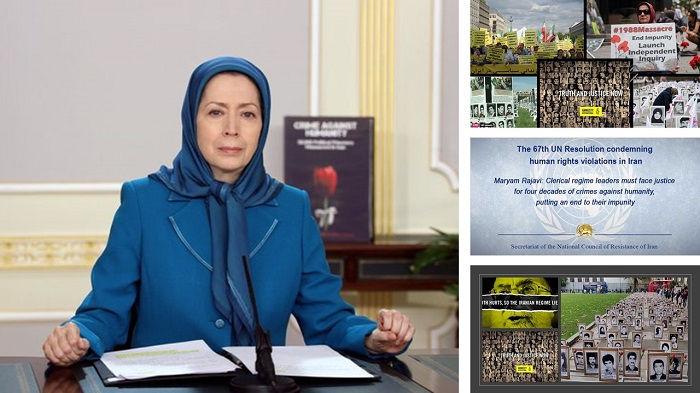 Mrs. Maryam Rajavi, the president-elect of the National Council of Resistance of Iran (NCRI), issued a statement on Saturday appreciating Guterres’ comments and reiterating a long-standing appeal for the international community to hold the regime and its high officials accountable.

Mrs. Rajavi stated, “The Iranian people and Resistance demand the referral of the dossier on the Iranian regime’s human rights abuses to the United Nations Security Council,” before adding, “The prosecution of Ali Khamenei, Ebrahim Raisi, Mohseni Ejei, and other officials responsible for four decades of atrocities.”

The three named officials are the regime’s supreme leader, president, and chief of the judiciary, in that order. Raisi, whom Khamenei appointed to lead the judiciary in 2019 and later appointed to the president after Raisi, inherited Ejei’s position.

Raisi’s elevation to the presidency

Raisi’s elevation to the presidency in the wake of the suppression of a major Iranian protest in November 2019 was the most blatant display of impunity yet, given that Raisi’s role in the crackdown had only served to highlight his prior legacy as one of the main perpetrators of a massacre of political prisoners in the summer of 1988.

Mrs. Rajavi’s speech singled out the massacre as a particularly noteworthy reason for international prosecution, claiming it “amounts to a crime against humanity and genocide.” During a conference sponsored by the NCRI in August, which also featured hundreds of former Iranian political prisoners and survivors of the 1988 massacre, academics of international law and human rights emphasized this claim.

The massacre, according to Eric David

The massacre, according to Eric David, a professor at the University of Brussels, “fulfills all of the criteria found in article 6C of the Nuremberg tribunal statute, up to article 7 of the current statute of the international criminal court,” justifying its classification as a crime against humanity.

He went on to say that the massacre’s documentation shows that the victims were largely targeted because they belonged to “a current of Islam that the mullahs’ regime contested.” The 1988 massacre was arguably enough to be labeled as genocide and prosecuted as a result of this religious motive, as well as the sheer scope of the slaughter.

During the massacre, around 30,000 individuals were executed, and some eyewitnesses feel that number is conservative.

The UN Secretary-report General’s touched on these issues by highlighting the case of Maryam Akbari Monfared, a political prisoner who has faced worsening mistreatment since filing a formal complaint with the judiciary regarding the 1988 massacre, in which she reportedly lost two siblings for being Mujahedin-e Khalq (MEK) supporters purged by Ruhollah Khomeini’s fatwa, which established the Islamic Republic of Iran.

Ebrahim Raisi, then the capital’s deputy prosecutor, was one of four members of the lead death commission in Tehran.

Raisi’s eventual leadership of the judiciary and the government, combined with the judiciary’s aggressive response to Monfared’s complaint, signal that the current regime has categorically rejected the notion of accountability for the massacre’s perpetrators, as well as perpetrators of other human rights violations.

The importance of international accountability

This, in turn, emphasizes the importance of international accountability.

Many relevant crimes, including those committed within the regime’s borders against other Iranians, are reportedly serious enough that they can be prosecuted not only at the International Criminal Court in response to a UN Security Council resolution, but also within any country that is a party to international law regarding genocide and crimes against humanity.