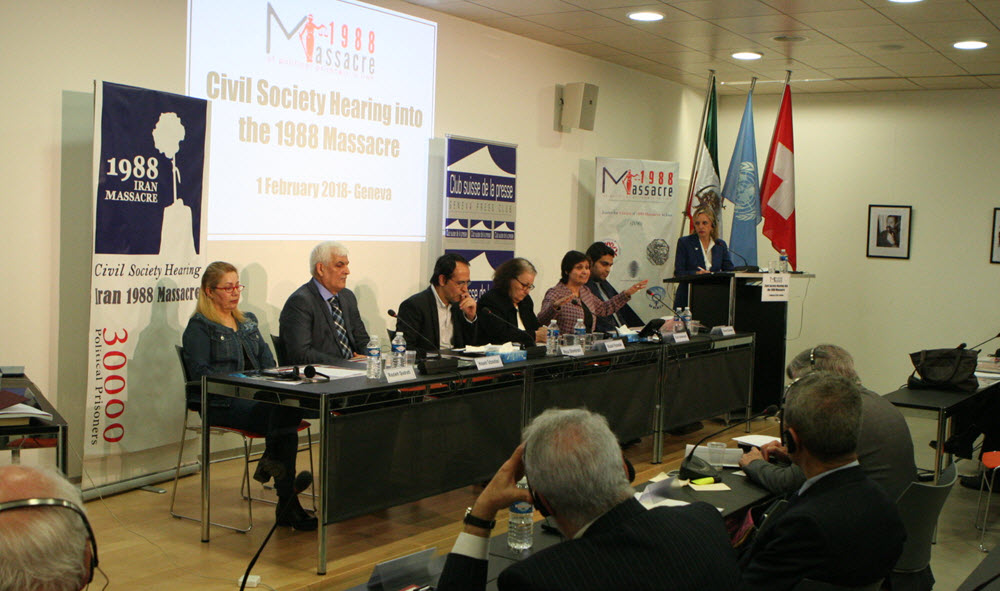 The UN was urged to address the mass arrests and the killings alleged to be taking place in jails following the recent uprising in Iran, in one of the first of its kind hearings in Geneva, on February 1st, 2018. The United Nations High Commissioner for Human Rights also heard appeals from international civil society and NGOs to establish a commission of inquiry to investigate the months-long massacre during which the Islamic Republic of Iran executed an estimated 30,000 political prisoners, mostly activists of the People’s Mojahedin Organization of Iran (PMOI/MEK) in 1988.

A civil society heard witnesses and legal experts, and offered an adjudication of the 1988 massacre of political prisoners in Iran. Former UN Judges, senior human rights officials, and human rights experts and advocates stressed that this inquiry is crucial in light of the arrest of thousands of anti-government protesters at the turn of the year.

The consensus among the participants in the hearing was that the 1988 massacre clearly constitutes a crime against humanity. They stressed that the international community, particularly the UN, are obligated to take all necessary measures to end impunity in this case. They warned that if Tehran was not held accountable, it will be emboldened to continue its human rights violations.

Many of the perpetrators of the 1988 massacre are alive today, and remain in positions of prominence in Iranian politics and law, according to the indictment, which
was presented by the distinguished British lawyer, Kirsty Brimelow QC.

Evidence establishing that the 1988 massacre constitutes a crime against humanity was presented by Brimelow, as well as evidence about the current situation in Iran — the recent mass arrests and the danger to protestors in custody. It was concluded that crimes against humanity in Iran continues to be perpetrated by the same officials today.

Justice for Victims of the 1988 Massacre in Iran (JVMI) organized the event, which was sponsored by four NGOs with Consultative Status at the UN.

1. An indictment related to the 1988 massacre was presented by Kirsty Brimelow QC, Chair of the Bar Human Rights Committee of the Bar of England and Wales.

2. Opinions were heard from preeminent international human rights experts, such as Prof Jean Ziegler, vice president of the Advisory Committee to the United Nations Human Rights Council, who said it is time for the UN to end the impunity for the perpetrators of the 1988 massacre; Dr Juan Garcés, Chief Lawyer in the Spanish case against General Pinochet, who explained that under international law these crimes must be investigated; Tahar Boumedra, a former UN official on human rights, who has written two books on the 1988 massacre provided a full picture of the 1988 massacre and the failure of the UN to take appropriate action; and Eric Sottas, former Secretary-General of the World Organization Against Torture (OMCT), who spoke about the need for the international community to investigate the crimes committed in 1988 in Iran.

3. Oral testimony from survivors and eye-witnesses to the massacre was head. Mostafa Naderi, who was incarcerated from 1981 to 1992 for being a supporter of the PMOI, but survived the 1988 massacre discussed his 11 years in prison, including five years spent in solitary confinement.

4. Geoffrey Robertson QC, head of Doughty Street Chambers in the UK and former appeal judge at the UN Special Court for Sierra Leone, and Prof Eric David, Professor emeritus of international law at the Université libre de Bruxelles were included in the presiding panel of adjudicators. Concluding remarks were presented by the adjudicators of the civil society at this final session of the day. Based on the evidence provided, both concluded that the UN has an obligation to investigate the 1988 massacre in Iran.

In her report of August 14th, 2017, Asma Jahangir, the Special Rapporteur on the situation of human rights in the Islamic Republic of Iran stated, “Between July and August 1988, thousands of political prisoners, men, women and teen-agers, were reportedly executed pursuant to a fatwa issued by the then Supreme Leader, Ayatollah Khomeini.
A three-man commission was reportedly created with a view to determining who should be executed. The bodies of the victims were reportedly buried in unmarked graves and their families never informed of their whereabouts.

These events, known as the 1988 massacres, have never been officially acknowledged. In January 1989, the Special Representative of the Commission on Human Rights on the situation of human rights in the Islamic Republic of Iran, Reynaldo Galindo Pohl, expressed concern over the ‘global denial’ of the executions and called on Iranian authorities to conduct an investigation.
Such an investigation has yet to be undertaken.”

UN Secretary General António Guterres’ report to the General Assembly about the “Situation of human rights in the Islamic Republic of Iran”, dated October 31st, 2017, stated, “The Office of the United Nations High Commissioner for Human Rights (OHCHR) continued to receive a large number of complaints from families of the victims of executions which took place in 1988.
In a joint statement issued in March, 20 human rights organizations called on the authorities to stop the harassment, intimidation and prosecution of human rights defenders seeking truth and justice on behalf of individuals who were summarily executed or forcibly disappeared during the 1980s and of their families.”