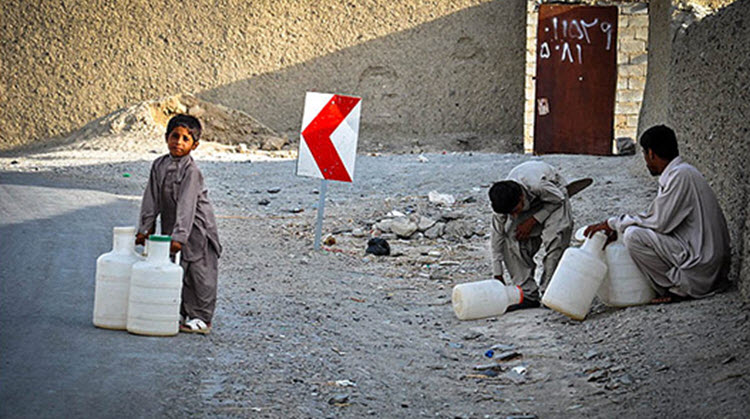 The office of Ministry of Energy’s Water and Wastewater Planning acknowledged that water conditions in Iran have reached a level described as ultra critical.

In Sistan and Bluchestan, one of Iran’s largest provinces, cities and villages are faced with such severe water disruptions, that water tanks must bring water to villages close to border, according to reports. Many villages are abandoned due to lack of water, their residents forced to leave. In Delgan, in southwestern Sistan and Baluchestan province, this has led to widespread protests.

On June 22, state media reported that the lack of water in Delgan’s villages is a serious problem, especially during the overwhelmingly hot summer days.

“Water disruption lasts four to five days sometimes”, claimed one of the residents, “which is quite disturbing considering the unprecedented heat wave.”

It is interesting that the area around Delgan’s villages is rich with groundwater resources, referred to as a jewel hidden deep inside the ground.

Still, reports from Lorestan on June 28th say that the government is incapable of providing 597 villages with water. Most villages across the province are suffering water scarcity. The head of regime’s Water and Wastewater Company in Lorestan said that the project to supply water to the villages was left unfinished because the company has run out of funds.

Residents of Boodjeh Sofla Aslandouz, a village in Ardebil province, reportedly closed the road on June 27th to protest the lack of drinking water.

Additionally, demanding  that the water crisis in the area be dealt with, residents of Felestin and Taleghani streets, as well as Shahidgah and Gharakord districts, in Pishva, Varamin, gathered to in front of regime’s governor building.

According to an article published by the National Council of Resistance of Iran (NCRI), the regime’s policies of excessive deep well digging, and their use of groundwater resources have caused this crisis, and the problem has been exacerbated as well, by the regime’s failure to create water distribution networks.