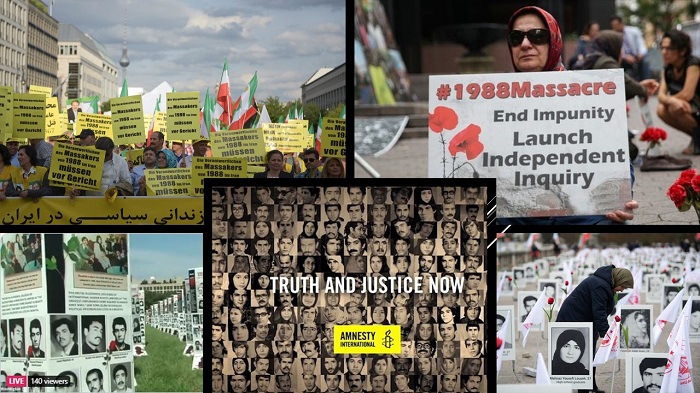 After arriving in Sweden as a tourist in 2019, Swedish authorities detained former Iranian jail official Hamid Noury. The arrest was described as a result of the principle of “universal jurisdiction,” which allows perpetrators of the most serious international law offenses to be punished in any country, regardless of the defendant’s nationality or the location of the crimes.

Noury was charged with war crimes and mass murder

Noury was charged with war crimes and mass murder and was put on trial in August, but the verdict and sentencing are not expected until April.

Noury was in charge of personnel at Gohardasht Prison in the summer of 1988, when the regime’s Supreme Leader Ruhollah Khomeini issued a fatwa that resulted in the mass execution of 30,000 political prisoners. Noury was directly involved in some of the killings, as well as the torture and interrogation of political prisoners.  Around 90% of those killed in the 1988 massacre were members or supporters of the People’s Mojahedin of Iran (PMOI / MEK Iran), and any association with the MEK was enough to justify summary execution.

Ahmad Ebrahimi, a witness who spent ten years as a political prisoner

“If any of you makes a mistake, then we will execute all of you,” Noury said, according to Ahmad Ebrahimi, a witness who spent ten years as a political prisoner beginning in 1981. According to another witness, Akbar Bandali, Noury had been in direct command of beating prisoners, both as a technique of interrogation and merely as a form of extrajudicial punishment. Bandali recounted telling Noury about a knee injury on one occasion, and Noury used the knowledge to develop a type of individualized torture.

Before the inception of the “death commission,” numerous killings had previously been carried out based on very brief interrogations. According to testimony given in Stockholm, these “trials” typically lasted less than three minutes and consisted of only one inquiry about the defendant’s views on the MEK.

Four officials made up the death commission

Four officials made up the death commission that governed Evin and Gohardasht Prisons. Ebrahim Raisi, the regime’s actual president, was one of them. Iranians and human rights advocates around the world were outraged by his selection to that position. It was a “grim reminder that impunity reigns supreme in Iran,” according to Amnesty International, which lamented the fact that Raisi had not been investigated for crimes against humanity.

That feeling has pervaded nearly every session of Hamid Noury’s trial. Families of the victims of the 1988 massacre have been protesting outside the Stockholm courthouse to draw attention to the proceedings inside and to restate calls for an international investigation and broader accountability for the atrocity’s perpetrators.

Raisi travels to Scotland for the COP26

In the event that Raisi travels to Scotland for the COP26 climate change summit in November, survivors and families of victims in the United Kingdom have signed a formal petition for his arrest. Former Member of the European Parliament Struan Stevenson, who presented Police Scotland with a 111-page dossier describing the atrocity and Raisi’s role, spoke at a news conference on the matter sponsored by Iran’s National Council of Resistance in Glasgow.

The press conference used Noury’s ongoing trial in Sweden as an example of the use of universal jurisdiction, arguing that Raisi or any of the approximately 70 current and former Iranian officials accused of involvement in the 1988 massacre should be tried under the same principle.