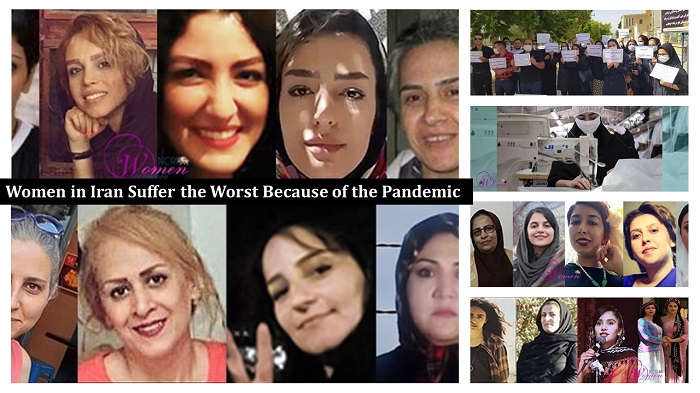 Over 211,000 people have died of the coronavirus in Iran, according to reports tallied by the Iranian opposition The People’s Mujahedin of Iran (PMOI / MEK Iran) and the National Council of Resistance of Iran (NCRI).

More than 211,000 people have died of the novel #coronavirus in 480 cities checkered across all of Iran's 31 provinces, according to the Iranian opposition PMOI/MEK.

One estimate by (PMOI / MEK Iran) analysis suggested is that a third of working-age women lost their jobs during the pandemic.

80% of the Iranian population is living below the poverty line in Iran. Iranian women are most likely those who do the lowest-paid jobs in the country, working as cleaners, food centers, hotels, offices, schools, and hairdressers.

About a million Iranian women lost their jobs during the first 6 months of the pandemic.

As Alaeddin Asvaji, general director of the office of policy-making and expansion of employment in the Labor Ministry, said recently, “Women’s employment was reduced by 749,000 individuals in spring 2020, compared to the same time last year.

Another 120,000 women lost their jobs from spring to summer 2020. These statistics show how much the outbreak of the Coronavirus has impacted women’s employment.”

Many, if not most, of these Iranian women who lost their jobs, did not have any work insurance, yet they may be the primary earners in their family. “Only 10 percent of women heads of households have access to job opportunities while 30 percent of them have a good command of at least one profession,” said the Justice Ministry’s deputy for human rights and international affairs, Mahmoud Abbasi, “considering the growing numbers of women heads of households, the vicious cycle of unemployment is also on the rise.”

Female unemployment is not helped by the fact that the Iranian regime does not recognize or even appreciate the fact that many women are breadwinners in their families. Iranian law is essentially a misogynistic relic due to the stone age attitudes of the men in charge of the country’s government.

40 percent of university graduates in Iran are unemployed

Many people who have been hit hardest by the pandemic are students. Typically, many tertiary level students eke out a living doing some of the worst and most temporary jobs in the country. This state of affairs disproportionally affects border communities such as those in Kermanshah and Kurdistan. 40 percent of university graduates in Iran are unemployed, and they include more women than men, according to the National Statistics Center (NSC).

Badly affected are nurses who are employed in the private health care sector. Around half of all nurses in the country work in this sector.  Mohammad Reza Sharifi Moghaddam, the general director of the House of Nurses, said that “the Ministry of Health has launched a propaganda blitz about having increased the nurses’ salaries by a small percentage, but this raise is for all healthcare workers and not nurses alone…”

Many nurses have been involved in protests about their economic condition. Nurses in both Yasuj and Fars provinces have been protesting their situation. Nearly half of the nurses in Iran have contracted Covid-19 at some stage during the last year. This is a reflection that many have been working on the frontline without protection from the disease.

The fact that a pandemic has been raging has not stopped the regime from harshly treating female prisoners. 112 women have already been executed in the country in the period of Hassan Rouhani’s tenure as President. Many of these women were arrested and imprisoned for being outspoken advocates of women’s rights or were members of minority ethnic groups.

A few of the many female victims of the Iranian regime’s vicious persecution include:

The abridged version of an article written for the Women’s’ news section of the NCRI website.

Iran: Female Farmers are Marginalized as a Result of Misogynist Regime

Iran: Ebrahim Raisi Must be Investigated Over Human Right Crimes