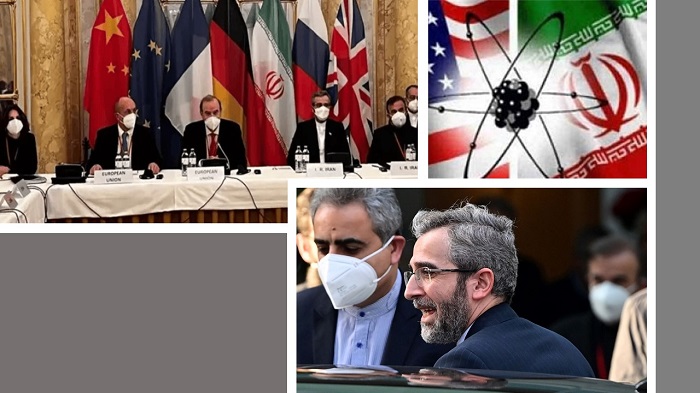 Iran’s state media is increasingly expressing concern and despair as the nuclear talks enter their last hours and the Iranian regime remains resolute in portraying positive progress. They claim that the negotiations have reached a ‘dangerous, steep, and bumpy turn’ at their ‘final turn.’

The failure of the Vienna talks is now being discussed in the media. “The position of the talks has changed slightly since Tuesday afternoon,” Ali Bigdeli, one of the regime’s international affairs experts, stated in an interview with the state-run daily Jahan-e Sanat on March 3. The reason for this change may be partly due to our comments and positions on Russia. In other words, Russia’s invasion of Ukraine greatly affected the negotiating environment, which is why Mr. Ulyanov has left the negotiating path. On the other hand, the Westerners have said because of the positions and statements of our senior officials in support of Russia that they may leave the negotiating table by the end of the week if the talks do not reach the desired result.”

The International Atomic Energy Agency (IAEA) has also requested that unnamed locations be inspected by their own inspectors. The bargaining process will be severely harmed if the agency does not report positively on the inspections.

The Iranian regime has found itself in an unusual dilemma as a result of this serious scenario. People will have a clearer view of the regime’s supreme leader Ali Khamenei’s vulnerability as a result of this, as well as the possibility of European and American parties withdrawing from the negotiation process.

Bigdeli has also acknowledged that the regime’s efforts to ease all sanctions have failed utterly. “The Americans have separated the four categories of (nuclear) sanctions, human rights, missiles, and regional issues, and are now ready to lift the sanctions [related to the Joint Comprehensive Plan of Action (JCPOA)], but they advise that negotiations continue in three other areas beyond the JCPOA,” he said. ” Iran, on the other hand, refuses to accept this. Given that the Americans are unlikely to turn a blind eye to any JCPOA restrictions, the position has become exceedingly challenging in many ways.”

Javan, a state-run newspaper connected with the regime’s Revolutionary Guards, expressed similar dissatisfaction. “Evidence demonstrates that the US-based mafia has not responded positively to any of Iran’s legitimate demands,” it stated, “and continues to beat the drum with its arrogant and mafia-style bullying, refusing to be flexible and grant Iran the smallest concessions.”

The daily warned of the regime’s ‘sheer loss’ and ‘chain JCPOAs until the complete erosion of (the regime’s) power’, noting that that it would have to address the missile, regional, and human rights issues, during the next round of talks.

As a result, it is possible to argue that when the current war in Ukraine began, the dictatorship erroneously believed it could play an aggressive role in the nuclear talks by supporting Russia and thereby shifting the situation in its advantage. However, it is increasingly feared that Russia may use the regime as a bargaining chip in negotiations with the West.

As things are, the regime is on a deadly road. Either it accepts the existing reality and makes “difficult decisions” under the threat of its western counterparts withdrawing from the discussions, or it retracts from the talks and embraces the danger that awaits them.

According to Bigdeli, the last scenario is analogous to the regime’s confrontation with the IAEA, which would most likely result in the IAEA’s Board of Governors pushing the UN Security Council to pass a resolution, as well as the restoration of all six prior sanction resolutions.

If the dictatorship does not comply with its western interlocutors’ demands, it will be crushed beneath the weight of mounting social crises and protests, as well as the hammer of international political and economic pressures. The fast-paced advancements will not end here, and the situation will deteriorate further. The newly constructed parameters clearly illustrate that time is working against the dictatorship.