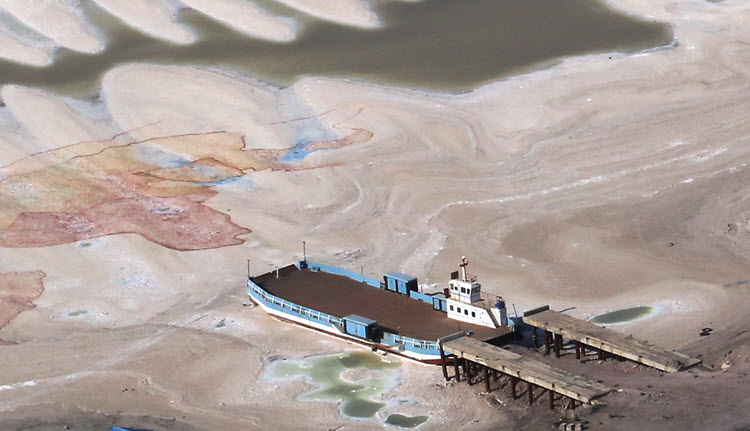 Actor Reza Kianian was one of the pioneers of the social media campaign I am Lake Urmia with his iconic post “If we save our lake, we will save ourselves.” And his words are supported by scientific evidence – a 2014 study revealed that 14 million people may be in danger if Lake Urmia continues to dry out, and many are facing serious health concerns already.

Lake Urmia has become an environmental issue of an international calibre, attracting the attention of internationally recognised officials, organisations and celebrities like Leonardo di Caprio. The problem that Lake Urmia faces is not only fought in Iran – it is one that has crossed borders and called for urgent attention from the international community.

According to The Guardian, Lake Urmia “has lost 90% of its surface area since the 1970s.” This is already having a profound effect on people’s health in the vicinity. The 2014 study examined the effects of dust storms on the health of school children in the vicinity. The study based its findings on a sample of 88 students from a province in East Azerbaijan.

21% of those studied reported episodes of wheezing while 14% had had episodes of wheezing over the last few years. 13% reported hearing a musical sound coming from their lungs when they breathed while 8% reported having these symptoms over the past few years. A staggering 30% reported having dry coughs. 10% had experienced sleeping difficulties because of the irritation in their breathing tracts, while 9% were suffering from restricted breathing and a congestion in their respiratory tract.

However, the Iranian regime is notorious for manipulating and changing statistics. Therefore, it may be more accurate to say that 97% of school children in the area of the study suffer from “irreversible respiratory and lung diseases.”

T News reported on the 16th of October that 14 million people may be in danger if Lake Urmia dries out. “Dust and salt storms will make their way from north-western parts of the country towards the central parts at which time even Tehran, Ghazvin or Arak will not be safe from the dust.”

While the reasons for the drought are clear, the future of Lake Urmia is misty. Artificial watering systems, put in place by the Iranian government without establishing the environmental cost first, have played a major role towards the drought. The Guardian reported that “one of the main factors contributing to the state of Lake Urmia is the interference in the natural flow of water into the lake by over 50 dams. The damage has been compounded by the unregulated withdrawal of water, water-intensive irrigation and the unsustainable use of fertilisers.”

Experts and environmentalists from various countries in Europe and Asia have visited Iran to find a solution, but their hopes to revive the lake are close to none, despite Iran’s president Hassan Rouhani’s government allocating $5 billion towards water conservation and infrastructure in the area of the historic lake.

In fact, many blame the Iranian government for intentionally choosing to ignore the very real health concerns. No information has been given to the public to raise awareness on this issue. But public awareness is vital in this matter, since “any kind of dust, especially salt-laden types, will always give rise to very dangerous diseases among the inhabitants in the region, among which are diseases like sinus infections, lung cancer, cardiovascular diseases, eye diseases, Asthma, ear, nose and throat infections and neurological diseases.”