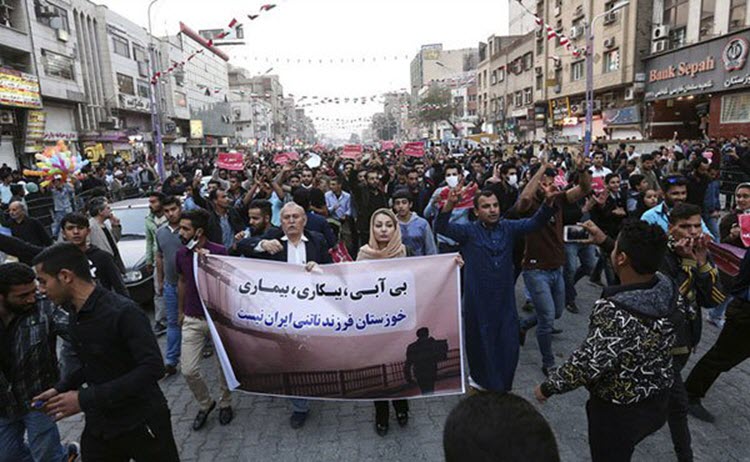 In the latest of a series of provocative actions, Iran has just commenced a new set of military drills and Israel and Saudi Arabia have responded by issuing warnings. Tensions are rising between Iran and the United States but one important factor has been overlooked in all this – the volatile state of society in Iran.

For the past 38 years, the people of Iran have been living under the dictatorship of the clerical regime. The past four of these years have been under the so-called “moderate” President Hassan Rouhani. But the reality is that there has been nothing moderate about him. The number of executions has risen dramatically and the crackdown on society is out of control.

In Ahvaz, southwest Iran, unrest is rife. The residents have been protesting the catastrophic plans that the regime is putting into place to reroute the Karoon River. The river is the main source of water in this area where the summers are extremely hot and is therefore of major importance for many reasons, including agriculture.

The regime has also put plans in place to extract oil via alternative methods and excessive dam construction features as one of the projects. Some of the methods already used have dried local lakes up. It is also causing major air pollution in the area and the residents face frequent water cuts and power outages. The health of the people is in grave danger.

In the province there have been numerous financial institutions, schools and universities that have had no choice but to close. Oil production has also dropped dramatically.

Starting on the 12th February and lasting a week, people protested in the street despite repeated warnings from state security forces. They protested the lack of basic amenities and chanted against the regime and state police forces.

Maryam Rajavi, the leader of the opposition, called on the people of Iran to rise in support of the people of Khuzestan and reiterated that the regime is behind all the problems these people are facing. She praised the people of Khuzestan for their bravery in protesting and reminded them that they do not deserve to be without the most basic of services, especially the vulnerable and sick people.

In 2015, the World Health Organization reported that Ahvaz was the most polluted city in the world. This has led to a very worrying situation where the Iranian regime is disregarding the lives and health of these people to make the maximum amount of money possible from their land. The regime has also warned people to stop gathering “illegally” otherwise there will be serious consequences.

Riot police from other provinces have been dispatched to the area and Western reporters have been banned from Ahvaz, leading many to wonder what the intentions of the regime are.

More rallies and protests will take place all across Iran. It will shake the foundations of the Iranian regime and will bring the Iranian people one step closer to achieving their dreams of democracy and freedom.