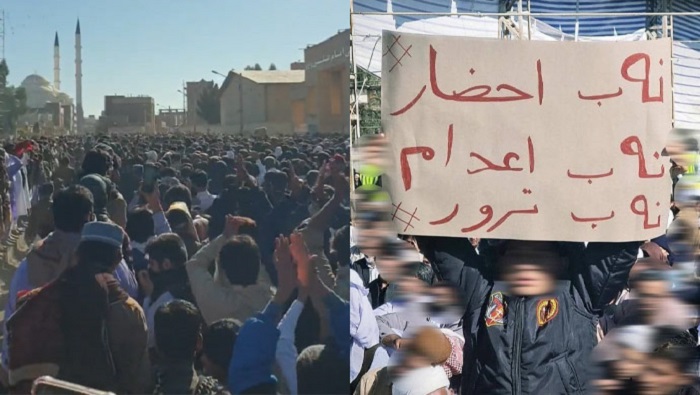 On Friday, the 92nd day of the Iranian uprising, the brave Baluchi community of Sistan & Baluchestan Province, located in southeast Iran, took to the streets again in line with their ongoing anti-regime weekly protests held every Friday. Despite the regime’s security forces continued crackdown on this long-oppressed community, the Baluchis’ endurance continues.

Protests in Iran have now spread to at least 280 cities. According to sources from the Iranian opposition People’s Mojahedin of Iran (PMOI/MEK), the regime’s forces have killed over 700 people and arrested over 30,000. The MEK has released the names of 580 protesters who were killed.

Protests began on Friday with massive rallies in Zahedan and Rask. Protesters marched after Friday prayers, chanting anti-regime slogans, vowing to avenge the protesters killed and executed in recent weeks by the regime. Protesters also demanded the release of political prisoners and denounced the Revolutionary Guards and Basij for their roles in the suppression of protesters.

On the 40th anniversary of Ali Ruzbahani’s murder by security forces, people gathered at his grave in Tehran to pay their respects. “We’re 80 million,” Ali’s brother said at the gathering. My brother, who stands in front of the armed forces holding a rock, knows that 80 million people support him.

We’re not afraid of your bullets and guns. We’re not afraid of anything. It makes no difference, whether you kill in Tehran or Kurdistan, or Khuzestan or Zahedan. We want justice for our brothers and sisters. I will kill those who killed my sister!”

“Congratulations to the oppressed but brave people of Iran. Congratulations to Iranian protesters, freedom fighters, and Resistance Units on the UN General Assembly’s adoption of its 69th resolution condemning human rights abuses in Iran. The pure blood of innocent children like Kian and Hasti killed during Iran’s protests sealed global censure of Khamenei’s bloodthirsty regime while the Iranian people’s resolve foiled the efforts of the regime’s allies and other rights violators to prevent the adoption of this resolution,” the NCRI President-elect explained in her message.

The pure blood of innocent children like Kian & Hasti killed during #IranProtests sealed global censure of Khamenei’s bloodthirsty regime while Iranian people’s resolve foiled the efforts of regime’s allies and other rights violators to prevent adoption of this resolution. pic.twitter.com/Ybs3PsSwLY

“The clerical regime has been involved in crimes against humanity for more than four decades. The mass execution of political prisoners and the massacre of the people of Kurdistan in the 1980s, the 1988 prison massacre, the slaughtering of protesters in November 2019, the massacre of Baluch and Arab compatriots, and the suppression of the nationwide uprising killing at least 700, including 70 children, and the criminal executions of the detained protesters in 2022.

The dossier of the regime’s crimes must be referred to UN Security Council to adopt preventive measures, especially regarding detained protesters, and the prosecution of regime leaders and officials,” Madam Rajavi added.