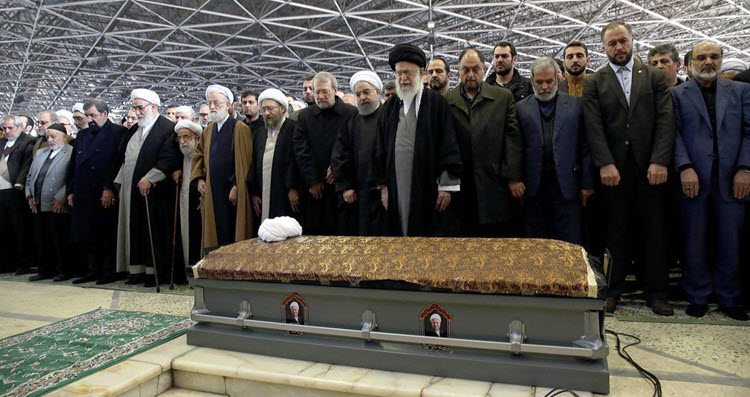 The funeral of Rafsanjani, the former President of Iran, brought earlier than expected trouble. The Rafsanjani-Rouhani chanted “these too many people are here for their love for leader”, whereas the other side shouted “dictator, dictator”, “our state television, our shame” and “political prisoners should get released”.

The unrest in society was not just contained in the capital – there were protests in Mashhad where people chanted “Down with Khamenei”.

Despite talks about Rafsanjani’s body being buried in Mashhad or Qom, he was finally laid to rest beside Khomeini’s tomb in the capital.

News agencies first reported that Khamenei had visited the home of Rafsanjani to offer his condolences, but these reports were removed and then outright denied.

In a speech about the death of the former president, Khamenei did not call him ‘Ayatollah’ contrary to what the state radio and television used to describe Rafsanjani. Khamenei referred to him as ‘Hojatoleslam’ which is a less important term in the Mullahs’ hierarchy.

Khamenei also omitted mentioning Rafsanjani’s ties to Khomeini. He did however mention his “opulent intelligence and rare intimacy in the past years”.

The Iranian regime has two structures. It is a combination of a middle-aged, ultra-reactionary leader called the ‘vilayat-e faqih’ and a body dependent on capitalism with a wide range of interests. This mix was evident in the conflict between Rafsanjani and Khamenei. However, the death of Rafsanjani does not mean that this side has now gone – each side is still firmly in place.

Speaking about the death of Rafsanjani and the conflict in the regime, the National Council of Resistance of Iran (NCRI) said: “Ironically, with the death of Rafsanjani, as someone who with his Mullah personality could somehow mitigate the conflict of interests, this contradiction is more than ever colored with conflict, and this is the same factor that has frightened the regime, with their fear being reflected in state media, particularly in those close to Rafsanjani’s band.”

It added: “This concern will inevitably occur to all regime’s forces, especially now that Rafsanjani is gone, forcing them to detach from the regime out of distress, at a time when regime is surrounded by social, economic and regional crises. A concern for which there’s no answer, since this is an expired regime which has no future. A fact Rafsanjani was very well aware of and fell to the ground fearing the regime’s prospect. By the way, was this the same fear that took his life?”

What is of most concern to the Iranian regime is not the conflicts and contradictions within itself that everyone can see, it is actually the social consequences. The Iranian people are getting to the end of their tether and, as happened in 2009, are ready to hit the streets to protest and show their anger.