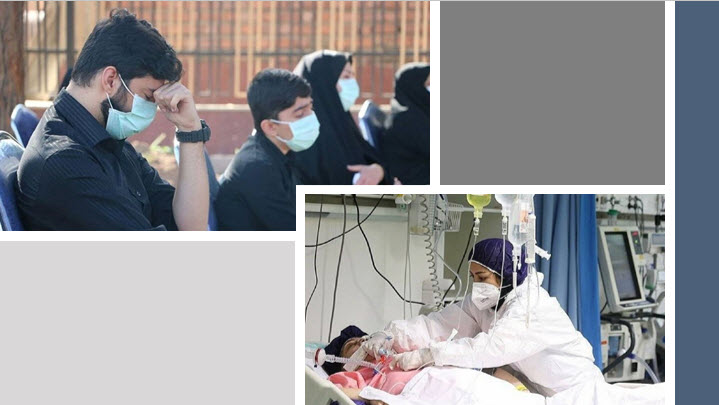 According to figures recorded by the Iranian opposition, the People’s Mojahedin of Iran (PMOI / MEK Iran), as of Saturday afternoon, local time, over 506,300 people have died of the new coronavirus in 547 cities spread throughout all 31 provinces of Iran. The regime’s official death toll is at 133,570, roughly a fourth of the actual total.

On Saturday, the regime’s Health Ministry released the mullahs’ contrived Covid-19 data, which showed 18,598 new cases and 133 deaths in the previous 24 hours. In addition, 3343 patients are in intensive care units, and 2078 new cases have been admitted to hospitals.”More than 60,000 people have sought initial medical care for coronavirus symptoms at various centers, and about 4,000 coronavirus patients are receiving medical care on a daily average across the country,” Deputy Health Minister Saeed Karimi told the semi-official ISNA news agency on Saturday.

“7,000 coronavirus sufferers have sought medical attention in various centers over the last 24 hours.” According to the semi-official ISNA news agency, the caretaker dean of Ahvaz Medical Sciences University said about Khuzestan province on Saturday, “We now have 700 patients hospitalized, of which 200 are in ICUs.”

Per a report released Saturday by the Isfahan Medical Sciences University, the province of Isfahan has 14 red zone cities, eight orange zone cities, and no yellow or blue zone cities. On Saturday, the regime’s official IRIB news agency reported that 943 cities across the province have contracted Covid-19 in the last 24 hours (apart from Kashan and Bidgol), and 1179 persons have been hospitalized, with 155 in intensive care units.

According to a report reported Saturday by the Fars news agency, an organization associated with the Revolutionary Guards (IRGC), 960 persons have sought treatment in Semnan province in the last 24 hours, up 13 percent from last week, and those being hospitalized have surged by 62 percent.

“We have 309 positive results out of 573 coronavirus testing.” According to the Mehr news agency, which is tied to the regime’s Ministry of Intelligence and Security, “Eight persons have died in the last 24 hours,” claimed the dean of Qom Medical Sciences University on Saturday.

“The consequences of passivity in the face of omicron have now surfaced, and there is no avoiding it, especially because one million people are currently at risk of being hospitalized for coronavirus, and our hospitals will be unable to effectively respond to this volume of patients.” The death toll could rise even higher than it is today. Officials at Tehran’s Beheshte Zahra Cemetery admit that they can only accept up to 200 coronavirus deaths every day and that they don’t have the employees to manage any further. As per a piece published on Saturday by the state-run Mostaghel newspaper, “the number of persons being hospitalized has surged five-fold in contrast to prior days, and these figures are climbing exponentially as we speak.”