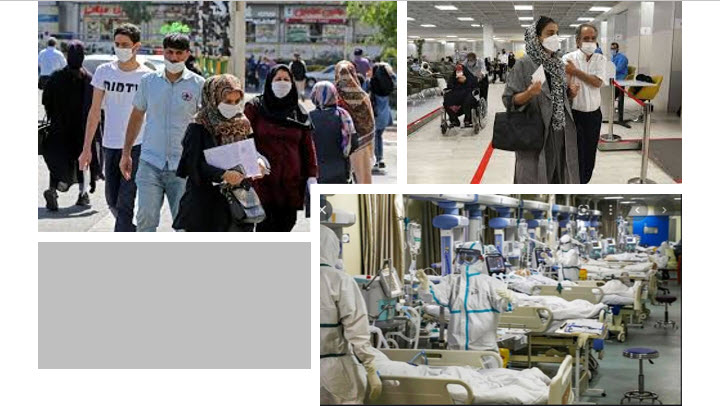 According to figures tabulated by the Iranian opposition, People’s Mojahedin of Iran (PMOI / MEK Iran), as of Wednesday afternoon, local time, over 507,400 people have died of the new coronavirus in 547 cities spread throughout all 31 provinces of Iran. The regime’s official death toll is 134,238, which is around a fourth of the true amount.

On Wednesday, the regime’s Health Ministry released the mullahs’ contrived Covid-19 data, which showed 16,310 new cases and 185 deaths in the previous 24 hours. In addition, 3607 people are in intensive care units, and 2275 new cases have been admitted to hospitals.

We have been hit once from such a decision and we will be hit again; however, I don’t know why the relevant officials don’t change their positions in this regard,” said a member of the National Covid-19 Task Force on Wednesday, according to the state-run Entekhab daily.

“Official statistics show a 200 percent increase in new cases; nevertheless, the reported numbers of new cases and hospitalizations are tens of times higher.” The number of coronavirus patients is surging on a daily and weekly basis, and the number of new cases is staggering. “The number of patients admitted to hospitals and the death toll from omicron soared by 100 percent last week.

We have yet to reach the peak’s midway point. According to the Mehr news agency, which is affiliated with the regime’s Ministry of Intelligence and Security, the interim head of Tehran’s Crisis Management Department claimed on Wednesday that “our hospitals will be reporting severe circumstances in the next two weeks.”

“We are facing a major warning; the number of Covid deaths has been steadily increasing for more than two weeks. According to the state-run Entekhab newspaper, the director of Tehran’s famous Behesht-e Zahra Cemetery remarked on Wednesday, “If this tendency continues, we will see more such fatalities.”

“In the preceding week, Markazi (Central) province ranked second in the country in terms of coronavirus deaths. According to the regime’s official IRNA news agency, “many of those dying in hospitals are promptly transferred to the emergency section and/or lost their lives within the first 24 hours,” said the deputy dean of Markazi Medical Sciences University on Wednesday.

“The number of people admitted to hospitals and those requiring initial medical attention continues to climb, and most of our communities have been designated as red zones.” 343 coronavirus cases have been admitted to hospitals in the last 24 hours. According to a statement made on Wednesday by the Razavi Khorasan Medical Sciences University, “197 of the 1136 patients hospitalized are in intensive care units.”