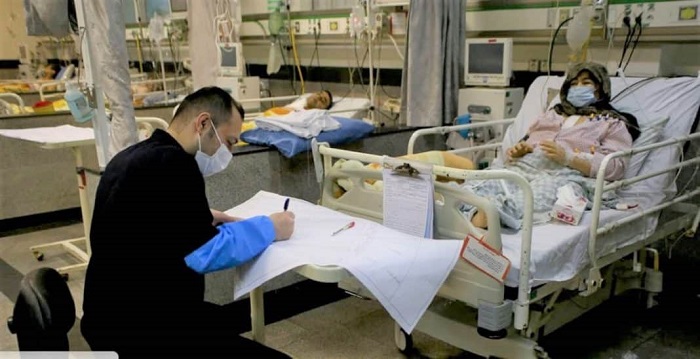 Over 530,000 people have died of the novel coronavirus in 547 cities checkered across all of Iran’s 31 provinces, according to reports tallied by the Iranian opposition People’s Mojahedin Organization of Iran (PMOI/MEK) as of Friday afternoon local time, April 8. The official death toll declared by the regime stands at 140,577, around a fourth of the actual figure.

The regime’s Health Ministry announced the mullahs’ engineered Covid-19 numbers from the past 24 hours on Saturday as 49 deaths and 1647 patients are in ICUs. Furthermore, 1757 new cases were registered, of which 304 have been hospitalized. 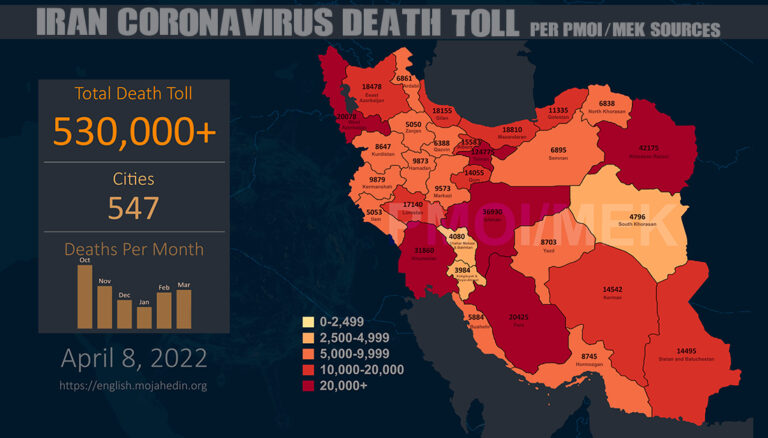 “The number of patients seeking initial medical care has increased tremendously, standing at around 3500 per day. This is while up to now this figure had lowered to 2000. If we are to witness a seventh, it is forecasted to be in late April,” said Nader Tavakoli, deputy chair of the Tehran Covid-19 Task Force on Friday, according to the semi-official ISNA news agency.

“During the past week with an increasing trend of new covid cases we are seeing the number of people hospitalized per day across Gilan province increase by four-fold. Once again, the trend is increasing,” according to a Friday report wired by the regime’s official IRNA news agency.

“Ilam province continues to have one of the country’s highest stats,” said the caretaker of Ilam Medical Sciences University on Friday, according to the Tasnim news agency, an outlet linked to the regime’s Revolutionary Guards (IRGC) Quds Force.

“The number of people seeking medical care has more than doubled, and the number of those being hospitalized has increased by 14 percent,” said the deputy dean of Mashhad Medical Sciences University on Thursday regarding Razavi Khorasan province, according to the regime’s official IRIB news agency.

“The number of patients hospitalized has increased in comparison to the day before. We currently have 188 patients hospitalized, and the cities of Mehriz, Taft, Abarkuh, Khatam, and Marvast are registered as red zones. Other cities and towns are registered as yellow zones,” said the spokesperson of Yazd Medical Sciences University on Friday, according to the regime’s official IRIB news agency.

“We currently have 250 patients hospitalized for covid, of which 80 are in ICUs and 21 are under ventilators,” according to a statement released on Friday by the West Azerbaijan Medical Sciences University.