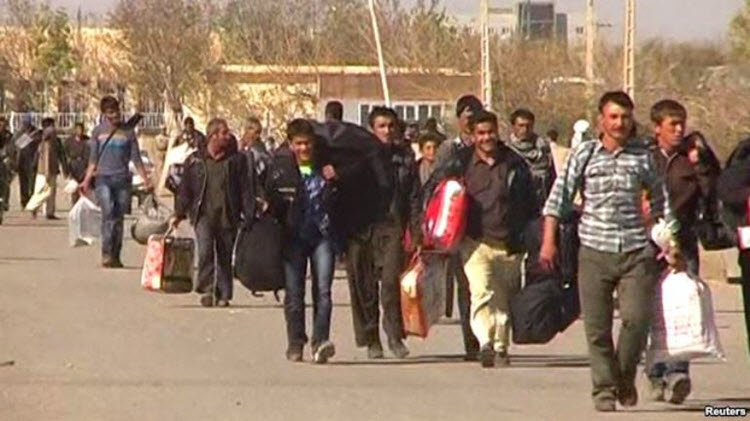 With the resurgent Taliban holding more than 40 percent of the rural territory in Afghanistan, some 130,000 undocumented Afghan refugees are heading toward an uncertain future after having been forced to flee Iran by the government.

Each day, hundreds more are expelled from Iran, who plans to  send 600,000 back to Afghanistan by the end of the year.

Spokesman for the Afghanistan Ministry of Refugees and Returnees, Hafiz Ahmad Miakhel, said last week, “7,695 Afghan refugees returned from Iran, 60-65 percent of whom were deported involuntarily. The majority of them were young individuals, but some were families, including women and children.”

Post-arrival services by government and refugee agencies have been strained, Kabul says, by the unprecedented influx of returnees, especially since Pakistan is also sending Afghan refugees home.

The growing number of deportees from Iran, along with high unemployment in Afghanistan is concerning, as some of young returnees may join the Taliban or other militant groups.

A likely rising crime rate may also follow, as the country is already shaky from terror attacks and a high death rate in the security forces.

According to Afghan government estimates, more than two million Afghans live in Iran. They settled there after they fled war in their own land. Approximately 950,000 people are classified as refugees.

Miakhel told VOA, “Of the 440,000 Afghan refugees who returned to Afghanistan from Iran last year, over 157,000 were deported, the majority of whom were young individuals who were residing illegally in Iran. The involuntary deportation is a clear violation of bilateral and trilateral agreements.”

Miakhel said further, that for the past few months, and for unspecified reasons, Iran closed the main Islam Qala border crossing. Refugees are forced to return using alternative border crossings that don’t have the facilities to accommodate high numbers.

This results in more than 2,000 people each day crowding through Nirmorz’s Malik border crossing, “which cannot accommodate more than 1,000 people a day,” according to Miakhel.

Regulations were issued by Iran in November 2012, that allowed police and custom authorities to expel at least 1.6 million undocumented foreigners by the end of 2015. Hundreds of thousands of Afghans have left Iran since that time.

Between New Year’s Day and May 13, The International Organization for Migration (IOM) said that there were 127,935 undocumented returnees from Iran.

Afghans had been allowed to go to Iran to take the jobs that Iranians didn’t want.  However, they lacked basic rights and access to economic opportunities while in Iran. Rights groups accused the Iranian government of mistreating them. According to Human Rights Watch, the violations include “physical abuse, detention in unsanitary and inhumane conditions, forced payment for transportation and accommodation in deportation camps, forced labor, and forced separation of families.”  Additionally, they say that Iranian authorities deport Afghan refugees, “summarily, without allowing them the opportunity to prove they have a right to remain in Iran, or to lodge an asylum application.”

Many refugees, particularly those in Tehran, claim to have been arrested for no reason. Police say that most of these arrests are for involvement in the drug trade.

Kabul says that the “refugee issue is sometimes used as a leverage against Afghanistan.” It is now trying to facilitate voluntary repatriation of refugees from Iran and Pakistan.

Thousands of Shi’ite Afghan refugees have been sent to Syria by Iran, to fight alongside Hezbollah and Iran’s Revolutionary Guard forces in support of the government of the Syrian President, Bashar al-Assad. Iran army promises the recruits Iranian citizenship and improved living standards for their families.

Last year, Iranian President Hassan Rouhani promised the Chief Executive of Afghanistan Abdullah Abdullah that legal status would be offered to Afghan refugees. Still, however, according spokesperson Miakhel, Tehran has not yet executed the Memorandum of Understanding between the two countries that was signed two years ago.