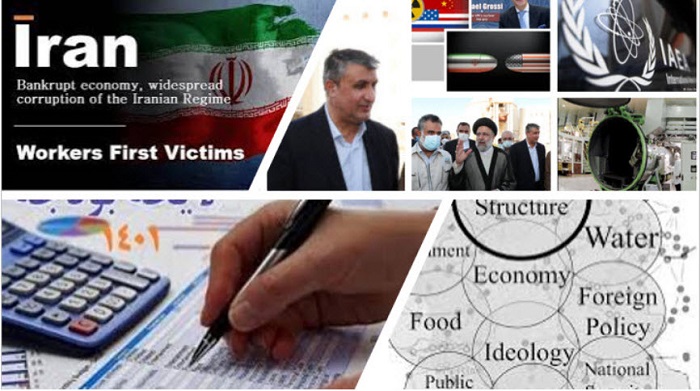 The Iranian regime’s parliament swiftly authorized removing the official exchange rate of 42,000 rials for a dollar as part of Ebrahim Raisi’s budget plan for 2022-2023, after months of flip-flopping. After extensive debates and various warnings from regime authorities about the implications of such a decision, the relocation was completed in less than 2 minutes.

“After 15 days of reviewing the plan to delete the official exchange rate, the parliament became fatigued, and you took advantage of the circumstance to approve the abolition of the official exchange rate in two minutes.” The people’s ever-shrinking tables would illustrate the impact of this decision. At the same time, the regime would not meet its duties,” Alireza Pak Fetrat, a Shiraz MP, told the state-run ISNA News Agency on March 6.

On March 6, the regime’s parliament authorized Ebrahim Raisi’s government “to remove the official exchange rate on the condition that it will provide the necessary resources for compensating the difference for the import of basic goods, medicine, and medical equipment,” according to the semi-official ISNA News Agency.

On March 6, Majlis National Security Commission member Hossain Noshabadi said that Raisi’s government would allocate 250,000 trillion rials in the form of electronic coupons, or $9 billion at the current exchange rate, to assist people and prevent another financial shock. While rejecting this claim, Alireza Beigi, regime’s MP from Tabriz, told the state-run Setar-e Sobh daily that “Regarding the electronic coupon, I must say that we have not yet incurred the costs and the government has not decided in this regard.”

“The abrupt elimination of the official exchange rate is destructive to people and could cause a slew of difficulties.” This rate is used to import a large number of vital commodities. Suppose the government abruptly removes or suspends the official rate. People will struggle to make a living in such a situation,” Mohammad Reza Rezaei Kochi, Chairman of the Parliament’s Civil Commission, told the state-run Mehr news agency on March 7.

Hassan Rouhani’s government implemented the official exchange rate in 2018 to stabilize the currency rate. Eshagh Jahangiri, Rouhani’s vice president, originally stated the availability of 42,000 rials for a dollar exchange rate. As a result, the rate is also referred to as “Jahangiri’s currency.”

The so-called “preferred currency” was supposed to be used to import the country’s basic necessities, such as food and medication. Many economists viewed this as an unofficial subsidy designed to keep the price of vital items in check. Yet, the regime’s officials utilized the official rate to import luxury goods that ordinary Iranians could not afford.

Because the Rouhani government lacked currency, it began printing banknotes to increase liquidity. As a result of the increased liquidity and Iran’s low output rate of 3%, inflation rose and prices skyrocketed.”The cost of corruption associated with this currency is estimated to be 5.9 quadrillion rials. It should be remembered that the whole development budget for 2021-2022 is roughly 1.4 quadrillion rials,” he continued, according to the state-run Keyhan daily on November 10, 2021.

Raisi wants to abolish the official exchange rate so that he may focus the regime’s limited resources on terrorism export, proxy wars, and keeping the authoritarian machinery in place. However, eliminating the official exchange will raise the prices of critical goods like food and medication much more.

40 years after Iran’s 1979 revolution, the ruling mullahs have taken the country back to the Middle Ages.